The seminar discusses the general trends in Russianpolitics 12 months after the December 4, 2011 State Duma election. Throughout2012, the independent opposition has sought to build on the protest atmospherecatalysed by this election, as well as the liberalising reforms initiated bytheoutgoing Medvedev administration in the early part of the year. But the returnof Vladimir Putin to presidential office in May has seen the authorities takean increasingly hard-line approach to opponents. How can we make sense of theconstellation of political forces 12 months after the State Duma election andis this hard-line indicative of Putin’slonger-term domestic political agenda?This seminar discusses themes of continuity and change in the year that hasgone and considers the outlook for the future.

Dr Arkady Moshes, Programme Director at the EU’s Eastern Neighbourhood and Russia research programme, opened the seminar by recapitulating the events one year ago, when there was news of protests after the Russian election. Predictions were made at the time, but some of the developments since then could not be foreseen. What has happened in the last year, and how to understand the reaction of authorities to the protest movement?

The first speaker Dr Sean Roberts talked about an interesting development in Russian politics since the 2011 elections, namely the emergence of two new and seemingly conflicting trends: reform and repression. In the first part of 2012, the regime introduced liberalising political reforms. On the other hand, there has been growing use of repression towards the opposition in the latter part of the year. An obvious explanation for this hard-line turn is the fact that the year began with Dmitry Medvedev as outgoing president, and continued in May with the presidency of Vladimir Putin. But, Dr Roberts argued, the leadership change alone cannot account for these two trends, which relate more to systemic factors. This leads to our speaker’s main point. In reality, the two trends of reform and repression are neither new nor conflicting, Dr Roberts contended. First of all, they have antecedents. And secondly, they actually complement each other, for they both aim to strengthen the power vertical.

Dr Roberts gave an overview of the reforms and repressive measures. He explained how large-scale fraud to support the ruling party United Russia in the December 2011 State Duma election triggered huge protests that continued in 2012. The non-systemic opposition also became more organised, presenting a challenge for the regime. The power vertical was losing its effectiveness, as evidenced by the long-term falling popularity of United Russia. The regime responded by loosening registration requirements for political parties. As a result, the number of parties increased from 7 in 2011 to 44 today. Taken at face value, this would mean that the monopoly of United Russia is undermined. The direct election of governors was also re-instigated. On the surface, this significant reform gives more autonomy to regions and presents opportunities for the opposition.

Signs of a more repressive approach appeared after Putin’s inauguration in May 2012. Could this be interpreted as a hardening of the regime’s ”soft authoritarianism”? The repression consisted of attempts to punish and harass the participants of the May protests – even their leaders like Sergei Udaltsov and Alexei Navalny – and especially the adoption of new laws, e.g. on public assemblies, NGO funding, the internet, and libel. The new law on treason has potentially a very broad application.

How much of a difference do the reforms actually make? Do they change the pyramid structure that is at the core of the authoritarian regime? According to Dr Roberts, the power vertical, i.e. the hierarchical relationship between the presidential administration and the regional administrations, also has a horizontal dimension, a complex network of interconnections with a wide range of institutions and organisations: United Russia’s regional organisations, security services, the Orthodox Church, youth organisations, NGOs, etc. He also argued that the party-system reform is designed to help United Russia: the new parties enhance the main party’s brand and the opposition is divided because they cannot form electoral blocs. More importantly, the number of parties that fail to pass the election threshold is increased, and United Russia gains most from their failure. The municipal filter in the governor elections also benefits United Russia, which is strong at the municipal level.

In conclusion, Dr Roberts said that the cosmetic reforms show a lack of desire for real political change on the part of the Russian regime. This is because the Russian system makes authentic reforms unattractive. Political power is structured as a web of control which is difficult to change. In this situation, repression is a logical option. Dr Roberts expects more ”authoritarian stagnation”, with reform only as a last resort. The court cases against opposition leaders Udaltsov and Navalny are pivotal: if they receive long prison sentences, the repression will go on, he predicted. What the Putin administration needs in the absence of structural change is a new message to justify the power vertical – or a reworking of the old message of stability.

The second speaker, Mr Kirill Rogov from the Gaidar Institute for Economic Policy in Moscow, did not take the demonstrations one year ago as his starting point. Instead, he focused on the fluctuation of public opinion concerning politics over the past few years, emphasising the longer trend. His statistics showed that while the economic situation among Russian households deteriorated after the financial crisis, this corresponded only to a moderate fall in Putin’s popularity ratings. Later, when the economy was in recovery, Putin nonetheless experienced a drop in his rating, and by the end of 2011, 60% of respondents said they approved of the president. According to Mr Rogov, this figure is high for a leader in any democratic country. But in Russia, in order to be a ”super-president”, the president needs a ”supermajority” of supporters. Elections in such political systems are held to confirm the dominance of the incumbent and the absence of alternatives. Mr Rogov saw the decline of support for Putin as part of a bigger phenomenon of changing values and political demands.

Mr Rogov presented a series of statistics to demonstrate how the principles of the authoritarian consensus have lost their support. Consolidated power and order are its cornerstones, and political involvement in the form of delegation is preferred. One of Mr Rogov’s charts showed how support for the centralisation of power has fallen. In the early 2000s, there was a high demand for the concentration of power in one person’s hands. This started to change in the middle of the decade: today, the share of people who are in favour of divided power is greater. Support for a multiparty system also rose sharply at the end of the 2000s. The perceived need for an opposition has similarly increased. The most important change relates to the basic value of order. At the turn of the millennium, Russian people clearly valued the maintenance of order and stability above other things, but since then, more and more value has been ascribed to democracy and human rights protection.

Mr Rogov listed other related statistics. Regarding the perception of regime performance in terms of the amount of corruption and bureaucracy compared to the Yeltsin era, he pointed out a significant shift between 2009 and 2010, when a negative assessment became much more widespread. In Russia, as is typical of hybrid regimes, the president and prime minister used to enjoy high levels of support while other political and state institutions were not trusted. In 2011 and 2012, there was a narrowing of the gap between trust for the president and other institutions.

While support for previous political principles has eroded, the new alternative agenda does not seem consolidated, Mr Rogov said. In the December 2011 elections, the regime faced several challenges. United Russia lost, even using fraud. The results were unsatisfactory in many of the regions. In addition to the loss of popularity, it showed that the Kremlin could not manage regional electoral machines. Putin needed to restore his relationship with regional elites, in order to regain control of electoral machines. According to Mr Rogov, the new law on the election of governors was used for this purpose.

The second task for Putin was to isolate the Moscow protesters and discredit their agenda, Mr Rogov continued. An imagined ”supermajority” of supporters marginalises discontent and discourages opportunism in the elites who see loyalty as the only option. The Moscow protesters legitimised the opposition, and laid claim to a new, common agenda. Putin had to show that he was ready to use force against opponents. What is more, he wanted to marginalise the Moscow protesters and their demands, in order to restore the illusion of an overwhelming loyal majority. The Kremlin decided to emphasise the differences between the Moscow protesters and the disappointed people of the provinces. Putin exaggerated the pro-Western, liberal attitudes of the big cities, demonstrating an apparent unbridgeable gap between them and the more conservative periphery.

Mr Rogov talked about Kremlin on one hand showing readiness for repression by creating a pseudo-legal basis for the prosecution of activists. On the other hand, the regime aimed to formulate a new pro-Putin agenda based anti-Westernism, traditional values, patriotism and orthodoxy. More spending on the defence industry was an attempt to find a new social base of support in the people employed there, Mr Rogov stated. Although Putin’s strategy succeeded in threatening the elites and discrediting the opposition, it failed in its main objective: his popularity is still waning. The current anti-corruption campaign is part of a new strategy. The need to maintain the illusion of the ”supermajority” is a problem yet to be solved.

After Mr Rogov’s presentation, it was time for comments and questions. Topics such as regional conflict, foreign policy, anti-Westernism vs. conservatism, corruption, the Arab Spring, and the role of the Church were discussed. 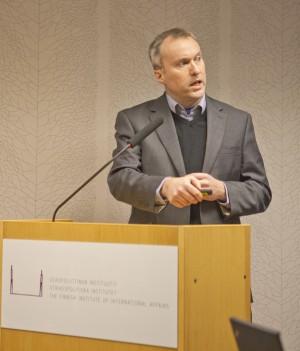 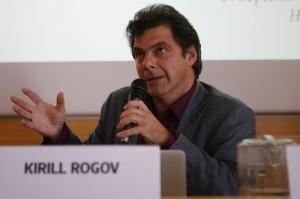