The European Council of December 2013 will focus on security and defence. The timing is apt, as Europe currently faces a variety of challenges in this area. On the one hand there is a need to set new goals for the role and future of the Common Security and Defence policy. On the other hand there is also a need to work on questions related both to a convergence of defence planning and concrete capability projects. Europeans are widely expected to shoulder greater responsibility for the crises in their increasingly unstable neighbourhood. The EU is still searching for its role as a security provider. The Common Security and Defence policy has through its existence had a crucial part in developing a European security community with both military and civilian capabilities. Yet, past crisis management operations have revealed a number of gaps in the capabilities of the EU member states. Prolonged economic uncertainty has led to uncoordinated defence budget cuts, risking to further undermine the Union’s and its member states’ ability to deliver on their security responsibilities. What kind of measures need to be taken in order to improve the situation, both in the short and in the long term? And what can be expected of the December summit?

Andrius Krivas, Vice-Minister for Foreign Affairs of the Republic of Lithuania

Teija Tiilikainen, Director of the Finnish Institute of International Affairs

Dr. Teija Tiilikainen opened the seminar by pointing out that there has been a lot of talk about where we are now and where we should be during the past months, as many policy areas have been in the shadow of the economic crisis. This applies also to security and defence policy. As far as the CSDP is concerned, it has been hard to reach compromises in the past, but there are very good reasons now for pooling and sharing capabilities as well as for co-operation in general.

Minister Erkki Tuomioja started his presentation by emphasising that Finland has consistently promoted the development of the CSDP. The summit in December provides an opportunity that should not be missed to further develop European security and defence policy. Because of the rise of multidimensional security challenges, the economic crisis and the challenge posed by the rising powers of Asia, there is a need for Europeans to cooperate more closely. It is especially important to figure out how to make the European defence market more efficient.

Tuomioja pointed out that while CSDP has been a success, the level of ambition has not been very high. However, especially crisis management missions have helped a lot of people and enhanced the image of European security and defence. Tuomioja mentioned many individual successes of the EU’s crisis management, including the monitoring missions in Georgia and Indonesia, the EULEX mission in Kosovo and the ATALANTA mission in the horn of Africa.

According to Tuomioja, the security and defence instruments should complement each other. A comprehensive and rapid response to crises could be provided by the EU battlegroups. However, the battlegroups remain unused because of the lack of political will. One of the challenges of the common security and defence policy is also the decision-making process, which needs to be accelerated. Other challenges that Tuomioja mentioned are the lack of permanent planning capability and gaps in the personnel with specialized profiles. Tuomioja also pointed out that the fields of cyber, energy and maritime security need to be developed urgently. He ended his presentation by stating that security is something we must positively build in a consistent manner; merely responding to threats will not be enough.

In his presentation the Lithuanian Vice-Minister for Foreign Affairs, Andrius Krivas, stressed two important factors that highlight the need to develop security and defence policies further, these being the changes in the global security environment and the effects of the economic crisis. In the current economic situation, where all the Member States are forced to make cuts to their defence budgets, all member states are forced to figure out how to do more with less.

According to Krivas, it is important to set up a truly strategic agenda for the summit in December. This would mean taking a new look at the European Security Strategy, since both the EU’s strategic environment and the Union itself have considerably changed since the year 2008 (when the ESS was last time re-evaluated in the framework of the Implementation Report). As examples of changes in the EU, Krivas mentioned the Lisbon Treaty and the enlargement of the Union. He also stressed that there is a need to bring partners closer to and involve them on a wider scale in CSDP operations. As important partners Krivas mentioned the countries participating in the Eastern Partnership. The US and Norway should also be brought into CSDP co-operation framework.

Krivas ended his presentation by remarking that the December European Council meeting will become an important milestone for the development of CSDP. His speech was followed by an open debate. Regarding the strategic aspects of the EU, there was some discussion about the uniqueness of the EU as a security provider. It was largely agreed that EU is indeed a unique actor in the field of security, since it is able to provide the entire spectrum of capabilities, meaning both military and civilian capabilities, to crisis management missions. There was also some talk about whether the EU should become more autonomous in the area of security and defence. It was, however, pointed out that even if it the EU should, the real question is whether it can: is the EU able to gather enough political will to do so? Regarding the EU’s internal defence market, it was stressed that more measures to open the defence market are expected from the Commission. It also became clear that instead of reaching exceptional results, the European Council is generally hoped to move things forward without creating further conflicts.

Dr. Antonio Missiroli opened the second session of the seminar by stating that the EU is a significant player in global security, pointing out that the Union’s sanctions work, that it is contributing to the safety of global trade routes, and that the Balkans are now pacified. However, cuts in defense budgets have a negative effect on military capabilities at the European level and one can also observe a very high level of fragmentation in European defence co-operation.

Regarding the EU’s neighborhoods in the East and South, Missiroli noted that both areas have gone through democratisation processes that have not perhaps met the EU’s expectations, suggesting that it would be advisable to take a more flexible approach instead of expecting others to become like us. Like other speakers, Missiroli also stressed the rising external challenges and the decreasing internal resources, adding that globalization further increases the effects that instability in other parts of the world, for example in Somalia, have on Europe’s security.

Missiroli’s presentation was followed by the second open discussion. There was some discussion about the political atmosphere in the EU. It was pointed out that the economic crisis has affected the political cohesion of the European Union, which has had a negative effect on the progress of defence co-operation too. The question of the battlegroups and why they have been left unused was also raised anew, and it was underlined that the situation of the battlegroups is seen as problematic in all the Member States and the mechanisms for their deployment should be further developed. The EU’s uniqueness was also talked about again. It was emphasised that the EU should not be a smaller NATO or a smaller UN, and that the Union’s advantage lies in its capability to respond to crisis in the most comprehensive way. The permanent memberships of the France and UK in the UN Security Council and their effect to the prospects of Europe’s common security and defence were also briefly discussed. Finally, there was also a short exchange of views on the EU-Turkey relations. It was noted that Europeans should not want Turkey to turn its back on Europe.

The event was concluded by Dr. Tiilikainen, who summarised the discussion by stating that a lot is expected of the summit in December, even if people might have become a little less optimistic about its possibilities. The question is what kind of an actor the EU wants to be, and in an ideal world one would answer that question by first defining the EU’s strategy and then building the necessary instruments and institutions. However, in reality, this seems to have happened the other way around. 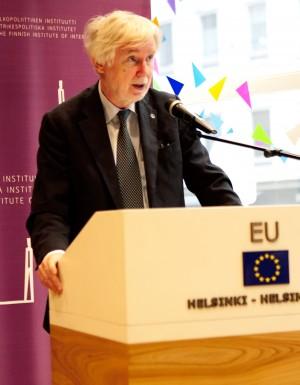 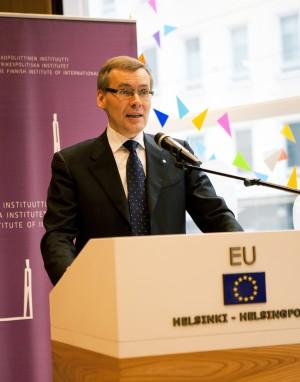 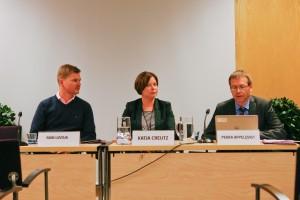