The Korean Peninsula lies at the heart of the most dynamic region in the world. About one third of global trade and one half of the world’s energy shipments originate or terminate in Northeast Asia. At the same time, the Korean Peninsula is highly vulnerable. North Korean nuclear-weapon tests and missile-test launches, as well as the opaqueness of the regime and its motivations, underline the risks posed to stability on the Peninsula. A major military confrontation would not only create human suffering on a massive scale but also chaos in global markets and logistics. Northeast Asia still does not have a proper mechanism to address regional security challenges, and the region’s security architecture continues to rest mainly upon bilateral relations between regional actors.

The seminar will explore the challenges to East Asian security, with a particular focus on North Korea. It will furthermore assess the importance of confidence-building measures and non-traditional security cooperation, such as the Northeast Asia Peace and Cooperation Initiative (NAPCI), launched by South Korea.

The seminar will also serve as a launch event for a FIIA Briefing Paper discussing related themes.

Programme Director Arkady Moshes opened the seminar, pointing out that FIIA closely follows East Asian affairs e.g. by organising seminars. We all know the importance of the region for global trade, even in Finland, he said. The region is also displaying some worrying characteristics, like the unpredictable and non-transparent regime in North Korea, coupled with a lack of conflict prevention mechanisms in the region.

Senior Research Fellow Bart Gaens referred to the Asian Paradox: on one hand, there are vibrant economies, integration, trade and investment, but on the other hand nationalism, rivalry, territorial disputes, and arms race. In order to stop this cycle, a regional approach to promote trust, dialogue and cooperation is needed. The seminar was to address three issues in this regard. First of all, a multilateral approach in view of the failure of the six-party talks, including the role of the Northeast Asia Peace and Cooperation Initiative (NAPCI). Secondly, potential lessons drawn from the European post-war experience, despite differences such as a lack of reconciliation processes in East Asia. And thirdly, the stance of the international community regarding North Korea’s nuclear weapons. Should denuclearisation and other objectives be linked or separate?

Kim Choon-goo began his presentation with a brief coverage of the current situation on the Peninsula. Recent events such as the cross-border shellings are in South Korea’s view carefully planned provocations by the DPRK. The North seemingly wants to escalate tensions and it has adopted a hawkish attitude to its southern neighbour. Despite attempts by South Korea to reconcile the situation, North Korea is planning strategic provocations such as the satellite launch due in October. It has taken advantage of the situation in the ROK, because in the long run, lingering tensions will instill doubts about the sustainability of the South’s policy.

Mr Kim went on to describe the NAPCI initiative that the ROK government has been promoting since President Park took office 2.5 years ago. It is not an organisation, but rather a process for building norms of multilateral cooperation, mutual benefit and trust. Through habits of cooperation, positive change can come about and resolve the paradox where interdependence meets lack of cooperation. This is part of President Park’s diplomatic strategy, the so-called ”Trustpolitik”. The ROK is learning from the history of German unification, and the way the OSCE helped relieve tension. The country is laying the foundation for the peaceful reunification of the peninsula. To this end, the government is trying to facilitate cooperation in soft security issues where all parties can join in. These include nuclear safety, energy security, climate change, cyberspace issues, public health, and disaster management. The first intergovernmental high-level meeting on NAPCI was held last year. The US, China, Japan, Russia and Mongolia were represented, as were the EU and NATO. Another of these meetings is due in October this year.

Choi Kang first discussed North Korea. People in Pyongyang are better off than before, they know where to buy what they want. Whether the economic situation is sustainable is questionable. The semi-capitalist system leads to corruption. Although people are well-educated and hard-working, even Chinese companies are reluctant to invest in North Korea. The ROK hopes that the Kaesong Industrial Complex could be expanded, but on the condition that the North gives up nuclear weapons.

Politically, the DPRK is quite stable, but in the past couple of years, the promotion and demotion of party officials and the executions of military leadership has spread fear among the elite. The stability will be challenged by the loyalty of generals. The change of the power structure between the party and the military in the future will have great significance.

The most critical issue are WMDs. North Korea is planning to launch a satellite and has alluded to nuclear test plans. Despite offers by South Korea and the United States to guarantee regime security, Kim Jong-un cannot change his policy line and North Korea remains a de facto nuclear power. Denuclearisation must be sought together by the five parties and the international community, but to date all efforts to engage North Korea have failed. The country’s conventional capabilities are also underestimated. Seoul is at a distance of only 40 km of the Demilitarized Zone. North Korea has added troops in the coastal area, increasing the ability to attack islands, and is diversifying its military capabilities.

Dr Choi then addressed multilateral cooperation and NAPCI, which the current ROK administration has been consistent in trying to achieve. Even the United States is becoming more supportive of the initiative, and Japan has found the utility of multilateral dialogue despite the difficulties with South Korea.

According to Professor Pekka Korhonen, while the EU’s economy worsens, the East Asian states have raised their status. But the momentum for political cooperation, he argued, was perhaps 15-20 years ago. He did not expect quick results from NAPCI. There has been a long string of South Korean initiatives. No strong, open agreements in East Asia seems to succeed, whether between China and Japan or between Japan and South Korea. Pride and maintenance of honour are important in these cultures, which hinders cooperation. The conflict is useful in the domestic policy of the region’s countries. From the point of view of the US and Europe, Japan is gliding towards the position of a pariah state, Professor Korhonen asserted. The Chinese and Korean argumentation about war issues has begun to tarnish Japan’s reputation.

Everyone actually benefits from North Korea’s pariah role and this maintains the status quo. Japan can adopt the role of a victim, where before they were seen as the perpetrators of war crimes. South Korea is able to depict itself as democratic and civilised. Japan is placed in a smaller and smaller role by China, but South Korea has good relations with both China and the US.

NAPCI looks good as a construct, but non-traditional soft security issues are not the best place to start, Professor Korhonen said. Ending the annual war games would be a step towards Trustpolitik. A bilateral, secret dialogue is the way to go, not an international public one. Professor Korhonen does not believe in an imminent collapse, since North Korea is a ”functioning society”. The DPRK has no reason to give up nuclear weapons.

Senior Research Fellow Jyrki Kallio gave comments based on the recently published FIIA Briefing Paper. He agreed with Professor Korhonen that demonising North Korea and predicting an imminent collapse is unconstructive. It would be conceited to think of North Korea as irrational or crazy. It is important to understand the discrepancy between what is best for the country and what is best for the leadership. Kim Jong-un has cemented the status of the nuclear weapons programme as part of his policy because it is his only trump card. Slamming the door on the rapprochement efforts of South Korea is irrational, yet rational from the point of view of the leadership. The DPRK hopes to have bilateral talks with the US and believes the nuclear weapons can help with this goal.

According to Mr Kallio, few experts believe in an imminent collapse, but since the 1990s, the fundamental problem remains the lack of food and fuel. The future of the country is not sustainable. For now, the elite in Pyongyang is satisfied, the military is in Kim’s command, and the population is keeping the façade of belief in the propaganda and maintaining unity. However, it will be difficult to build up the next generation of top leaders. Younger members of the elite are more interested in seeking their own enrichment, but less patriotic and less religiously inclined to support the dynasty. The transition could be abrupt and lead to an erosion of the party from within. Uprisings by ordinary people and civil war are also possible. Or, if Kim Jong-un died without an heir, a power struggle in the party would follow. It is hard to believe everything would continue as before in the long term. Should the country collapse, other parties have no mechanism for dealing with it. They can only develop damage control mechanisms, Mr Kallio concluded.

After the presentations and comments, the discussion continued. Mr Kim pointed out the lack of certainty about what is going on and whether Kim Jong-un has the real power. There is pressure from everywhere on the DPRK and China has warned the North not to launch the satellite. If they do, there will be more sanctions.

Dr Choi agreed that in the short term, the situation will remain stable. However, the loyalty of the people or the power structure between the party and the military raise questions. A popular uprising is difficult because people are closely monitored. The South does not mean to demonise the North, but there is a lack of trust because of its provocations. North Korea takes advantage of the concern of others over the possibility of collapse: China is still pumping resources and engages in barter trade with the DPRK. Human rights issues should be raised more, Dr Choi said.

The floor was opened for audience comments. It was noted that citing facts is not ”demonisation”, and the use of the word ”pariah” in connection with Japan was criticised. Other topics of discussion included the differences in the situation of the Peninsula compared to Germany, China’s stance on reunification and the US as an ally of the ROK, and the lifting of sanctions which was not seen as an option by the panelists. 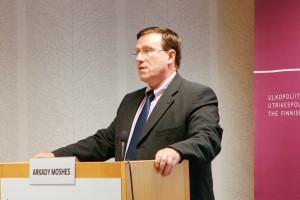 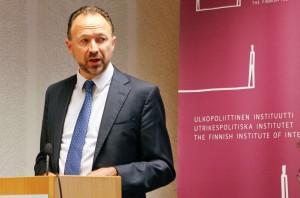 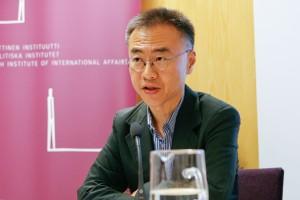 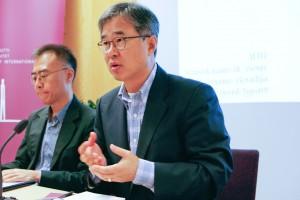 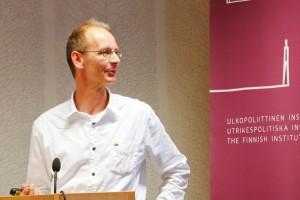 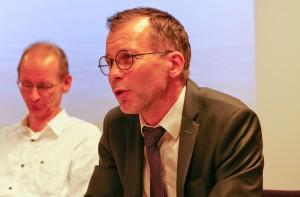 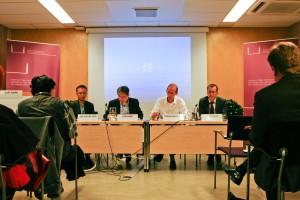