Twenty years have passed since the historic Earth Summit in Rio in 1992. The debate on the scope of sustainable development and UN institutions has picked up again in international policy making. Large geopolitical questions loom in the background: what can be achieved through large thematic meetings in the contemporary multipolar world and fragmented international order? Can the RIO+20 meeting pave way to increased political ambition, or rules-based global governance on environmental issues?

THE RETURN TO RIO

Rio plus or minus 20? Sustainable Development twenty years after

The seminar was opened by programme director Dr. Mika Aaltola, who reminded the audience of the importance of this topic especially now that we are heading towards the June Rio+20 Summit. The first speaker was Dr. Tapio Kanninen, Co-Director of the Sustainable Global Governance Project and Senior Fellow, Ralph Bunche Institute for International Studies in the City University of New York., who spoke under the heading “Global Sustainability or Survivability?”

He began his presentation by looking at the UNEP GEO-5 conclusions, which show that in environmental issues only limited progress has been achieved during the past 20 years. The basic note of evaluation was that globally most components of the environment continue to degrade. Dr. Kanninen continued by pointing out that there are two conflicting views on economic growth and sustainability: the first view assumes that there are no real limits to growth but that this is “polluting growth”, whereas the alternative view acknowledges that there are limits to growth and we are reaching that limit. This latter view is the “inconvenient truth” and thus the engine that forces us to work towards creating a more sustainable ways of living.

Dr Kanninen then moved on to presenting different definitions of sustainable development and their implications on economic growth in developing and developed countries. He outlined the historical backdrop of the key UN conferences – Stockholm 1972, Rio 1992 and Johannesburg 2002 – and critically reflected on the inadequacy of the outcomes of these meetings. He highlighted one of the main problems, which has been that the implementation of Rio conference Agenda 21 has been perceived as too expensive by the developed countries. The priorities in both domestic and international context have been largely determined by economic interests in developed and developing countries, as “neoliberal paradigm” or “sustainable development”.

Dr Kanninen continued by explaining how the authors of the Zero-draft (the preliminary document for the upcoming Rio +20 conference) realize that in order to make significant progress towards building green economies new investments, new skills formation, technology development, transfer and access, and capacity building in all countries is required. Dr. Kanninen referred to the comments of the Green Economy Coalition (GEC), who state that the zero-draft steps rather delicately around the question, not only of how much the transition is going to cost, but how we are going to leverage additional funds. According to the GEC, the past experience of Rio 1992 showed that governments alone will not be able to pay for the transition so there is a need to think a lot more creatively about how to leverage additional finance. Dr. Kanninen agrees with these views of the GEC and believes that there are likely to be no significant impacts of the Rio +20 conference. There might be some steps forward in terms of strengthening the institutional framework (i.e. the role of the CSD and/or UNEP) but all in all this conference is a start of a long process of negotiations

Professor Janne Hukkinen reflected in his commentary on the definition of “green economy” and noted that the concept is too loose. He highlighted the need for further work on narrowing down on the concept, and bringing in planetary boundaries. Professor Hukkinen also noted, positively, that a lot of the needed technology already exists and that raising significant amounts of public financing rapidly is possible, as proven by the financial crisis.  He also remarked that our economy and society is oil dependent, and that running out of oil would bring serious challenges to the whole concept of economic growth. He concluded by stating that due to the current economic crisis we are in many ways in a lock-in situation (not only economically but also institutionally and behaviorally) and what is needed is a general acceptance that societies need to adapt to a new reality.

In his commentary Jouni Nissinen, Head of Environmental Protection, Finnish Association for Nature Conservation, began by highlighting the importance of the notion of planetary boundaries, which was also taken up in the newly published conclusions of the High Level Panel on Global Sustainability. Mr. Nissinen said that even though the Brundtland Commission has stated that sustainable development and economic growth can go hand in hand we must not forget the physical limits of our planet. He proposed five concrete issues, which should be remembered in the Rio + 20 preparations. The first is the notion of planetary boundaries; the second is remembering the importance of the Rio principles; thirdly the need to seriously consider the proposals made by the high level panel on global sustainability; fourthly a discussion on innovative financing needs to be done and finally, voluntary participation in achieving goals needs to be discarded since only obligations will work.

A lively question and answer session followed the presentations and during this the audience and the speakers discussed among others the role of technologies, climate change prevention and how all actors in society can and should be included in the sustainability debate. 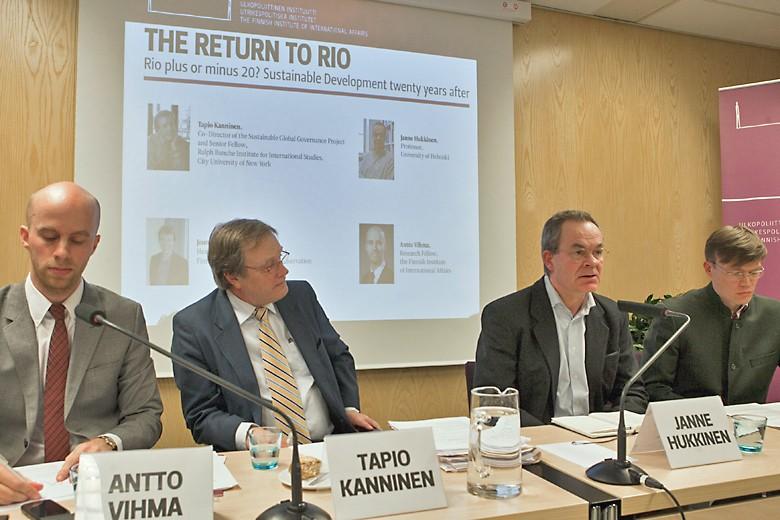