Anna-Kaisa Hiltunen, acting Managing Editor and Head of Research Communications at FIIA, received the award for her book Euroopan porteilla (’At the gates of Europe’). The State Award for Public Information was awarded to her during the prize award ceremony on October 13th, 2020.

Hiltunen’s book is the first work of non-fiction about the history and background of EU’s asylum policy written in the Finnish language. The book elaborates on the role of EU’s member-states and various EU organs in European asylum policy.

The Committee for Public Information gave the following motivation for the award: ‘’Euroopan porteilla lives up to its name and provides a fact-based overview of the historical and the modern state of European asylum policy.’’ 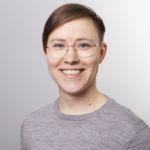 ‘’It is great that such an important and debated topic receives attention through this award, especially because the discussion surrounding the theme is often not based on facts. My hope is that this award reminds us about the importance of fact-based discussion.’’, Hiltunen states.

More information about to book in Finnish from this link.