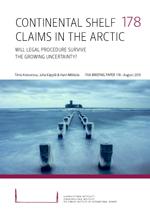 The Arctic Ocean seabed is expected to contain substantial natural resource reserves, which states seek to lay claim to. The once influential idea that this could lead to a scramble for the Arctic and inter-state conflict has generally been considered unlikely.

Until now, the Arctic Ocean coastal states have followed rule-based procedures to settle their overlapping claims in the Arctic Ocean. The United Nations Convention on the Law of the Sea (UNCLOS) provides a legal framework for the delineation of the outer limits of the continental shelf. Russia, Canada, Denmark and Norway have submitted, or are in the process of submitting, their claims to the relevant United Nations body, the Commission on the Limits of the Continental Shelf.

Despite the growing tension between Russia and other Arctic Ocean coastal states, it is likely that the continental shelf claims will be settled in an orderly fashion. This is mostly due to the fact that the UNCLOS treaty works for the benefit of the coastal states.

However, adverse political dynamics may challenge the status of, and adherence to, the relevant legal processes in the Arctic. Most of these are related to uncertainty over Russia. Consequently, the possibility of unilateral and illegal action cannot be completely ruled out.