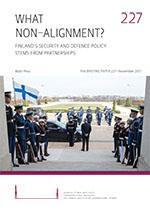 The blueprint for a Nordic federation: Selected thoughts for reinforcing Nordic cooperation