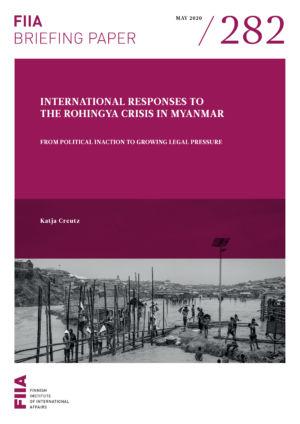 In December 2019, Myanmar defended itself before the International Court of Justice against genocide charges for the atrocities committed in 2016–2017 against the Rohingya Muslims. The Rohingya crisis has driven several hundreds of thousands of the Rohingya as refugees into neighbouring Bangladesh with an unsettled future. In addition, questions of perpetrator accountability remain open.

The UN Human Rights Council created a fact-finding mission and an international investigative mechanism for the purpose of bringing the individuals responsible to justice.

With Western states generally condemning Myanmar’s actions, China’s influence in and over Myanmar has intensified, as the country has blocked robust action before the UN Security Council, leading to charges of political inaction.

There is growing legal pressure against Myanmar at the national and international level, forcing it to respond. While accountability proceedings are important, problems may emerge when several courts deal with the same situation. Their capacity to provide immediate relief in relation to the crisis is also small.