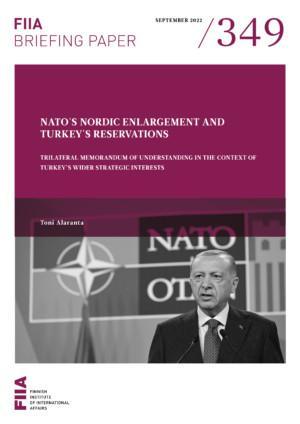 With the signing of the trilateral Memorandum of Understanding (MoU), Turkey dropped its initial objection to Finland’s and Sweden’s NATO membership, but has since argued that the conditions agreed in the MoU have not yet been fulfilled.

In addition to requiring Sweden and Finland to take a more vigorous stance regarding the Kurdistan Workers’ Party (PKK) and its extension in Syria, Turkey has used Nordic NATO applications as a tool to raise these issues on NATO’s agenda, pressuring the US in particular for a change in its Syria policy.

Turkey’s reservations need to be conceptualized within its determined search for strategic autonomy, increased room for manoeuvre, and an ideological decoupling from the West.

Turkey’s strategic interests have increasingly diverged from the rest of the alliance, likely leading to a more permanent intra-alliance opposition position in the coming years, part of which are the ongoing trilateral talks between Turkey, Finland and Sweden.