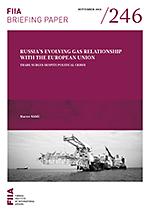 Gas trade between the European Union and Russia increased considerably in both 2016 and 2017, despite the ongoing political crisis. Simultaneously, two long-standing disputes in the EU-Russia gas relationship – regarding Gazprom’s monopolistic practices and the EU’s third energy package – were settled.

Russian companies have invested in new infrastructural projects for the export of gas to Europe, including the launch of the Yamal LNG terminal in December 2017 and the construction of the TurkStream and Nord Stream 2 pipelines. However, significant challenges remain for the relationship, most notably the intra-EU controversy on Nord Stream 2 and uncertainty about future gas transit in Ukraine.

An agreement between Russia, the EU and Ukraine is possible whereby Nord Stream 2 would be accommodated with contractual guarantees that gas transit in Ukraine will continue. This would also satisfy the commercial requests of Russia’s Southern and Eastern European gas customers.

Identities and Vulnerabilities: The Ukraine Crisis and the Securitisation of the EU-Russia Gas Trade

Nord Stream 2: Opportunities and Dilemmas of a new gas supply route for the EU