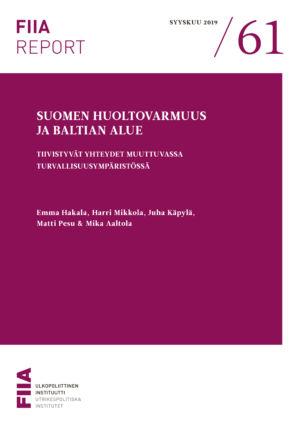 From the point of view of Finland, the Baltic countries form not only an important export and production area but also a significant transportation route. Freight and passenger traffic between Finland and the Baltic countries has increased fast during the past decade, while new energy and data networks have also emerged. These increasingly dense connections require investments on cross-border infrastructure. On the other hand, recent changes in the security policy situation have created new uncertainties in the Baltic Sea region.

This report examines the significance of the connections to and through the Baltic countries for Finnish security of supply. It charts critical connections in various sectors and traces their relevance for civil preparedness and social resilience in Finland. To support the analysis, the report also aims to specify the conceptual framework of security of supply from the point of view of global flows.