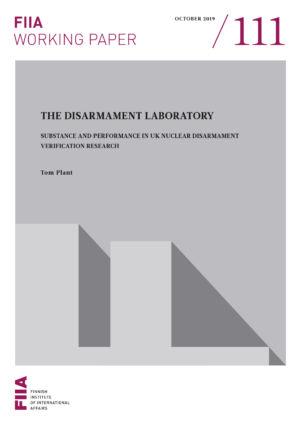 Over the last twenty years, the UK has researched nuclear arms control and disarmament verification in increasing breadth and depth. Although this principally technical activity has not yet been directly linked to any of the UK’s nuclear weapons stockpile reductions or postural changes, it does form much of the UK’s recent disarmament diplomacy. This is because more effective techniques for verification of nuclear arms control and disarmament are widely regarded as essential for the multilateral regimes that might be necessary if global nuclear stockpiles are to reduce.

Thus, the UK balances its retention of nuclear weapons with plans – or at least the appearance of plans – for future disarmament. This balance stems in part from the degree of internal conflict in the UK about its nuclear weapon status, and the perceived need to take the lead in nuclear disarmament matters, set against decreasing room for manoeuvre in terms of substantive reductions to its declared nuclear arsenal; in the future it is likely to be increasingly central to the UK’s disarmament diplomacy.

The degree to which UK verification research is genuinely intended to make a tangible disarmament contribution therefore merits scrutiny. This is particularly true for those states that are also working in the field or are interested in doing so. This paper lays out how Finland and other Nordic states could contribute by encouraging the UK to take more meaningful action, inter alia by linking UK verification research and its modernisation programme to potential arms control futures.

The end of nuclear arms control? Implications for the Nordic region