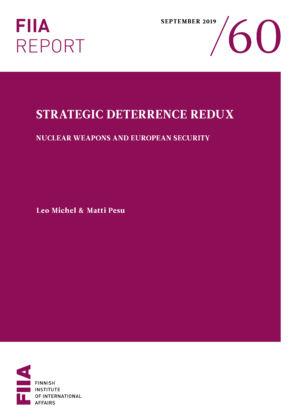 One of the most notable consequences of the end of the Cold War was the diminished role of nuclear weapons in international relations. The world’s primary nuclear weapon powers, the United States and the Russian Federation, made considerable reductions in their nuclear forces. The climax of the process was the New START Treaty signed in 2010.

Now, the optimism that characterized the first decades of the post-Cold War era is rapidly evaporating. Geopolitical competition again dominates global and regional security dynamics. Nuclear powers are modernizing their forces and introducing novel systems that may affect strategic stability. At the same time, existing arms control regimes are crumbling.

This report takes stock of recent developments in deterrence in general, and nuclear deterrence in particular. Its main ambition is to understand how deterrence has changed in light of certain post-Cold War trends.

To this end, the report introduces the basic principles of deterrence. It also explores the nuclear-related policies and capabilities of the four nuclear weapon states most directly involved in European security affairs – Russia, the United States, France, and the United Kingdom. Importantly, the report also analyses the implications of the recent trends in strategic deterrence for Northern Europe.

This report is part of a research project conducted by the FIIA entitled ‘New Challenges for Strategic Deterrence in the 21st Century’. The project is part of the implementation of the Government Plan for Analysis, Assessment and Research 2018.