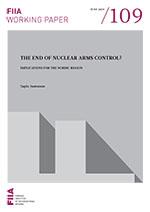 The current discussion on the possible repercussions of the INF crisis have largely concentrated either on great power relations or on the level of NATO-Russia relations and the future of the transatlantic ties. This Working Paper aims to broaden the present discussion by reflecting on the potential implications of the negative trends in nuclear weapons politics and arms control from the perspective of the Nordic region.