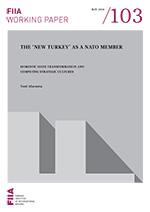 This study uses the concept of ‘strategic culture’ to analyze how Turkey’s incumbent Justice and Development Party’s (AKP) hegemonic position and domestic state transformation project has affected Turkey’s foreign policy and its position in world politics, especially regarding NATO membership.

The article demonstrates that the AKP’s new and more assertive foreign policy can be seen, first of all, as a result of the domestic power struggle between two major sub-cultures of Turkey’s enduring strategic culture (Republican versus Imperial), and second, as a more Islamist interpretation of the Imperial sub-culture.

This has led to a situation whereby the ideological attachment to the Western world and NATO, long characteristic of Turkey’s positioning in the world, is refuted without Turkey being ready to abandon the practical benefits of its NATO membership.

The EU-Turkey stalemate: Detecting the root causes of the dysfunctional relationship