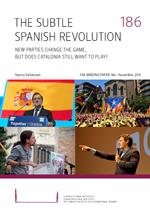 Spanish politics is in flux. In addition to the two historically dominant players, the socialist party (PSOE) and the currently governing conservative party (PP), there are two new players in the field that are changing the whole game: Ciudadanos (“Citizens”), a centrist party, and the left-wing Podemos (“We Can”).

No party is likely to win an absolute majority in the parliamentary elections on 20 December, which means that either Ciudadanos or Podemos will play some kind of role in the next government’s policymaking. This also means that there is a need to find a way to make compromises and coalition politics, a new phenomenon in Spanish politics.

An optimistic scenario is that the new parties will force the old, closed and elitist parties into a more democratic and transparent way of conducting politics. However, no major reforms regarding the political system or constitution are to be expected in the short run.

A pessimistic scenario is that there are more political players in the field who neither know nor care what the other players are aiming for. This may lead to political paralysis, and a new series of elections both at the regional and national level, if the parties are unable to reach consensus on the formations of the government.

Three Options for the EU: Assessing the EU’s powers in a true economic and political union

Kosovo, law and order: Balancing rule of law principles after the president’s resignation