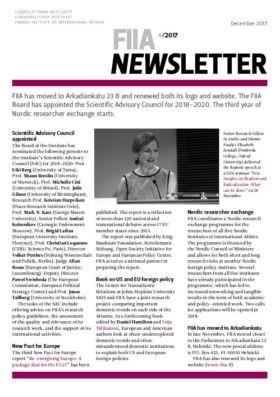 The third New Pact for Europe report “Re-energising Europe: A package deal for the EU27” has been published. The report is a reflection of more than 120 national and transnational debates across 17 EU member states since 2013. The report was published by King Baudouin Foundation, Bertelsmann Stiftung, Open Society Initiative for Europe and European Policy Centre. FIIA acted as a national partner in preparing the report.

The Center for Transatlantic Relations at Johns Hopkins University SAIS and FIIA have a joint research project comparing important domestic trends on each side of the Atlantic. In a forthcoming book edited by Daniel Hamilton and Teija Tiilikainen, European and American authors look at often-underexplored domestic trends and oftenmisunderstood domestic institutions to explain both US and European foreign policies.

FIIA coordinates a Nordic research exchange programme for the researchers of all five Nordic Institutes of International Affairs. The programme is financed by the Nordic Council of Ministers and allows for both short and long research visits at another Nordic foreign policy institute. Several researchers from all five institutes have already participated in the programme, which has led to increased networking and tangible results in the form of both academic and policy-oriented work. Two calls for applications will be opened in 2018.

FIIA has moved to Arkadiankatu

In late November, FIIA moved closer to the Parliament to Arkadiankatu 23 B, Helsinki. The new postal address is P.O. Box 425, FI-00101 Helsinki. FIIA has also renewed its logo and
website (www.fiia.fi).

Marcin Kaczmarski will join the EU’s Eastern Neighbourhood and Russia research programme at the end of January. He is an expert on Russia-China relations.

This year’s fourth issue of Ulkopolitiikka, the Finnish Journal of Foreign Affairs, focuses on federalism and its possibilities within the EU. MEP Heidi Hautala, MP Jutta Urpilainen and journalist Hannu Reime share their views on federalism and discuss how Europe could become more democratic. The Journal is available both as a printed journal and as an e-paper at lehtiluukku.fi.

Working Papers 100-101
After the election of no alternatives: The Kremlin’s domestic political challenges from 2018 onwards
Jussi Lassila

The Communist Party convenes in China: What is in the tea leaves?
Jyrki Kallio

The Catalonian independence project: The frustration of the near-majority
Teemu Tammikko

Subscribe/unsubscribe to the FIIA Newsletter here.