States, sovereign authorities and borders do not always match. In transit zones and preclearance areas of airports, for example, travelers can be physically in one country but not legally admitted to that country. This lecture analyzes the disconnect between models of sovereignty and the empirical facts of governance and control by examining exceptions to the rule: anomalies of sovereignty along military-strategic, economic and scientific axes. Some of these spaces in-between include Diego Garcia, Commonwealth of Northern Marianas Islands (CNMI), Antarctica, and the transit zones of international airports. A specific example is the extraordinary rendition program, by which terror suspects were taken to so-called “black-sites” and supposedly tortured, which was an official US program, but one for which the government will accept no responsibility.

Sovereignty has commonly been seen as something which goes hand in hand with territory. However, in today’s world borders are transcendent and thus the boundaries of territories become less meaningful. At the same time, laws are lagging behind these developments.

Dissolving borders and differing concepts of territories bring about some surprising issues. For instance, in an airport, five different jurisdictions can prevail inside a rather constricted area. Under normal circumstances this might not create problems, but in the case of an exception, these anomalies can potentially unveil the weaknesses of the system and reveal legal vacuums.

In addition to the inabilities in practice to deal with the changing nature of borders and sovereignties, also the theories and models of sovereignty have not caught up with recent developments. There are several concrete examples of borders that are not tangible, but dependent on each situation and on each person crossing them. For instance, the widely used concept of Europe can mean several things. The borders of Europe are imagined, varying and dependent on the interpreter. The same applies in the case of the city of Jerusalem. The real life borders of the city are random and dispersed, and contradict with any legally defined borders. This manifests how the norms of sovereignty bend for reasons of security.

In his lecture, Dr Mark Salter presented his idea on the performance of identities. This can be exemplified with the following example. Upon the entrance to a different country, the individual is stripped down from their prevailing identity. They become a person whose temporary identity, and destiny, is dependent on two issues. Whether the person can be admitted into the country depends first and foremost on the information that travels virtually and thus precedes them. Upon boarding, the knowledge of any suspicious activities related to the said person has already been passed on to the receiving country.

Second, the final decision of the admittance of a person into a country is made by the border officials. This is where performance comes into play. It is expected for everyone to know the rules of the performance in the said situation. These rules are clear: no joking, no lying, behave seriously according to the signs at the airport. Nonetheless, these rules are bent by each individual participating in the performance. Deceiving the officials is forbidden. However, coincidentally, border officials are trained to distinguish between lies that matter and lies that do not. The assumption is that each person will tell a lie.

In today’s world where passports are based on biometric identifications, the performance has been pushed back in time. It is very hard to use someone else’s passport at the border, but getting a passport under a false identity is less challenging. Dr Salter pointed out how many issues today are seemingly very secure and scientific, but when looking at the actual practices, they come down to very simple things. A scientific risk management of air passengers can turn out to be based on “common knowledge”, that is, prejudices. Practices and policies are not identical, and they form a whole only when coming together.

As well as identity, sovereignty is also performed. There is no sovereignty, unless the social rituals and laws that the concept demands for are enacted by actual people. Theories materialise only in every day life. Dr Salter referred to Dr Giorgio Agamben, who states that the sovereign is the one who is able to take decisions. Sovereignty thus always requires people to make it true by acting accordingly.

Sometimes the concept of sovereignty can also be rather resilient. For instance in Antarctica, it is accepted that several sovereignty claims by different states overlap. This adaptability clashes with the traditional Westphalian concept of sovereignty, where there can only be one sovereign in one space at one time. Dr Salter pointed out that as long as this view dating from the 17th century prevails, the facts on the ground today will constantly be misread.  Instead of this outdated view, sovereignty needs to be thought of in terms of performance.

Gaps in the global state based system exist. Dr Salter presented a few examples of these inconsistencies in his lecture. Some areas in the world represent anomalies of sovereignty, and there are people who suffer from these. A well known example of this is the status of the prisoners at Guantánamo Bay, who are subjects to the law but not subjects in the law. This means laws can be imposed on them, but they have no rights under the same jurisdiction. The power of the legal system is that people can be included and excluded from it.

Another anomaly in global politics is the case of the island Diego Garcia, which is a joint military base of the United States and the United Kingdom situated on UK soil, governed by the US. It was split from the British Colony of Mauritius in the 1960s, and since then the US has done all the building on the island. The original inhabitants were forced to leave the island. Any discussions regarding the return of the dislocated people have been blocked due to reasons of “national security”. The island serves as an important military base, but it also plays a role in the widely criticised so-called extraordinary rendition programme. The island has served as a testing ground for ways to go around international law: the prisoners of the extraordinary rendition programme have been transported 12 miles offshore, and land mines that the UK is not supposed to own, have also been technically taken off the UK soil to an atoll.

Referring to “national security” as justifying the unlawful or questionable actions represents something that can be seen as a part of the recent development of “securitization”. Turning political issues into issues of security formally depoliticizes them. This means they are removed from normal politics into a field that shies away from criticism. 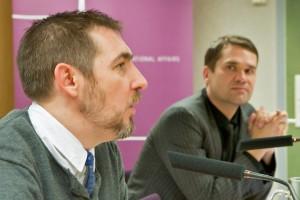