The United States will play a major role in the upcoming Copenhagen climate conference in December. It has the biggest historical responsibility for global greenhouse gas emissions and as the leading industrial nation the United States is expected to take measures to curb emissions. China and India are unlikely to start mitigating their emissions without a decisive action by the US.

The Obama administration aims to cut US emissions and the House of Representatives passed in June its climate bill, known as Waxman-Markey. The next step is taken by the Senate when it decides on its climate legislation.

The new American ambassador Bruce J. Oreck discusses the current state and future prospects of the US climate policy. He was sworn in as U.S. Ambassador to Finland on August 12, 2009.
Ambassador Oreck obtained his Masters of Law from New York University and has practiced law for over 25 years. In addition to his private legal practice, Ambassador Oreck served as General Counsel and Executive Vice President for his privately held family business, the Oreck Corporation, until its sale in 2003.

Ambassador Oreck worked for many years restoring and redeveloping historic properties, guiding his career towards “green” building ultimately focusing on climate change and renewable/alternative energy. In 2003, Ambassador and Mrs. Oreck founded the Zero Carbon Initiative which is committed to implementing both experimental and off-the-shelf technologies in the built environment, not just to reduce but to offset greenhouse gas emissions.

Newly-appointed U.S. Ambassador to Finland Bruce J. Oreck took the floor to give a presentation on the current and future prospects of the US climate policy. Ambassador Oreck initially offered a historical account of climate-related phenomena in the United States, together with projections of what was ahead if no action is taken on climate change. The ambassador set out the clear message that the current administration takes the issue of climate change seriously and that the danger cannot be denied, representing a total shift in position from that of the previous administration.

Ambassador Oreck moved on to present the audience with a detailed account of the achievements of the Obama administration on the issue climate change in the 8 months since its inauguration. Policies enacted include new standards for car efficiency, providing 80 billion dollars for clean energy investment and the passing of the American Clean Energy and Security Act of 2009 (ACES) through the House of Representatives. Amb. Oreck then moved away from national level issues to highlight the efforts and accomplishments on the state and local level. Mr Oreck was keen to stress the complex nature of the American political system, signifying that Congress typically lags behind policies exacted at the state level.

With the speaker’s home state of Colorado taken as case in point, Ambassador Oreck presented examples of the progressive policies being executed below the federal level, such as the requirement for 20% of energy needs to be met by renewables; a carbon tax introduced by the city of Boulder, and bold emission reductions commitments by other cities. More broadly, it was stated that California was, despite the policy of incumbent governor’s party, implementing green legislation, whilst 960 mayors across the nation had signed up to the commitments under the Kyoto Protocol.

The dominant message of Ambassador Oreck’s presentation was that the challenges posed by the threat climate change can only be effectively tackled if economics and climate policy are combined. Mr Oreck accentuated that the necessary shifts in policy and behaviour were only achievable if suitable economic incentives were present and sustainable. Related to this point, it was also expressed that the benefits of improving energy efficiency were such that “going green” was the single best investment a US company could make. At the same time, the Ambassador was of the opinion that whilst government-funded initiatives were a good start, they needed to be sustainable rather than reliant on state subsidies and grants, as some schemes in Europe appeared to be. The opinion was also imparted that the challenges of climate change also present the opportunity for the next wave of innovation. The presentation also conveyed the potential of both renewable, carbon-neutral technologies to provide for national and global energy needs and, at the same time, for the aforementioned wave of innovation.

In conclusion, Ambassador Oreck asserted that America was under-going transformational change regarding energy and climate policy, despite the slowness of Congress, and that the US often does things despite Congress. Mr Oreck assured the audience that with a committed President Obama at the top and dynamic business below, it was obvious “how the game was going to end”.

In the Q&A session the audience was interested in the Waxman-Markey bill, the climate change negotiations in Copenhagen in December, issues pertaining to technology, and also China. Questioned as to why there was such political resistance to addressing climate change, the Ambassador answered that whereas the political process in Finland was based on reaching consensus, the US system was more akin to a fist-fight; sources of resistance arise as some politicians don’t accept the science, whilst others believe they can win votes through opposition.

The ambassador was asked what impact technology could have on mitigating climate change on a global scale, with the reply being that the answer lay in combining expertise, capital and access to markets. Mr Oreck made the point that Finland had often been a leader in this area and that there was thus scope for future cooperation. A related question put to the ambassador queried as to whether he believed China could take the lead from America in green technology and innovation, to which the reply was an assertive ‘no’, based on the current dynamics of the international division of labour.

When asked if the US President had something ‘up his sleeve’ for Copenhagen, Mr Oreck reminded the audience that there were approximately 2,000 points of negotiation heading into the COP15 meeting and the administration had only been involved in the UNFCCC process for eight months, with the previous 8 years wasted outside the process. It was also reiterated that Copenhagen was merely a point along the path towards to tackling climate change. Ambassador Oreck went on to stress that it was important that Copenhagen doesn’t become the point of debate in the US rather than climate change itself, as had happened with Kyoto in the 1990s. Regarding the status of the Waxman-Markey/ACES act, the timing of dealing with and potentially passing the act was very much dependent on the resolution of the current domestic debate on healthcare in the US, which serves as a complication and distraction, from the perspective of climate policy. 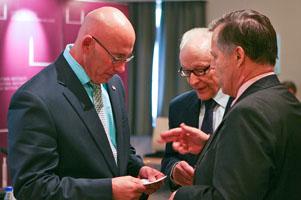 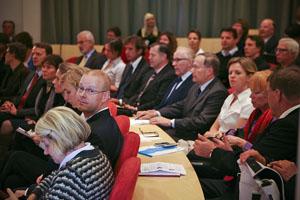 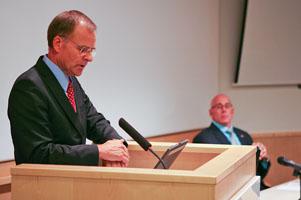 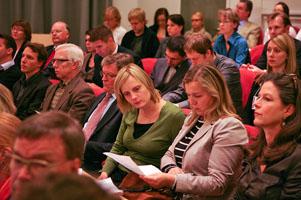 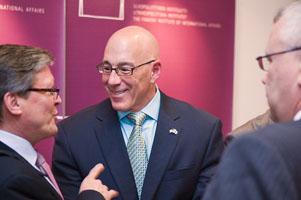 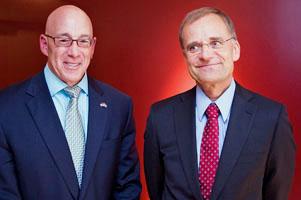 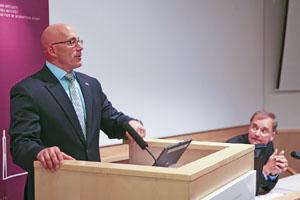