This seminar will address the present stage of the negotiations on the reunification of Cyprus, following the election of Mr. Dervish Eroglu as the leader of the Turkish Cypriot Community and after more than 70 meetings between President Dimitris Christofias and the former leader of the Turkish Cypriot community Mr. Mehmet Ali Talat. Much still remains to be discussed and agreed upon in the timeframe defined by the elections both in the republic of Cyprus and Turkey in 2011. Is an agreement possible or will the solution elude us once again? What can the United Nations (UN) do to accelerate
the process and facilitate the search for a solution? What will happen if this process will not bring about a solution?

Mr. Downer was appointed as the UN Secretary-General’s Special Adviser on Cyprus in July 2008. Prior to this post, he served as the Minister for Foreign Affairs of Australia from 1996 until 2007. As Foreign Minister, Mr. Downer was deeply engaged in the effort to achieve independence in Timor-Leste, and also played a leadership role in the Bougainville peace process. Mr. Downer was a diplomat in the Department of Foreign Affairs from 1976 to 1982, serving in the Australian Mission to the European Union, the Australian Representation to the North Atlantic Treaty Organization (NATO) and at Australian embassies in Belgium and Luxembourg.

Mr. Blomberg served as Special Adviser on Cyprus to Commissioner Olli Rehn between 2005 -2008. Before this he had a long career with the Ministry for Foreign Affairs, which he joined in 1974. In 1985 he became Ambassador of Finland to Canada, after which he served first as Director General for Political Affairs, and then as Under-Secretary of State for Political Affairs in 1992-2001. Before retiring, Mr. Blomberg also served as Ambassador of Finland to Estonia in 2001-2005.

Dr Teija Tiilikainen opened the seminar by welcoming the speakers and audience to the event.

Mr Alexander Downer began his keynote speech by pointing out that following the rejection of the Annan Plan by the Greek Cypriots in 2004, hopes on unification were low. Many thought that partition of the island was the only solution to the decades-long dispute. However, with Mr Dimitris Christofias coming into office in the 2008 presidential election, domestic and international optimism regained ground as he immediately commenced negotiations with Mr Mehmet Ali Talat, President of the “Turkish Republic of Northern Cyprus”. Official negotiations began on 3 September 2008 with both the presidents and the United Nations giving press releases. But the prevailing mood was still that it would be an enormous challenge to end a frozen conflict that dates back over five decades. How could it be solved this time?

The starting point to the negotiations, as stipulated in the UN framework, was the aim to create a bi-zonal, bi-communal federation with political qualities. Power sharing, Downer pointed out, was the only option. He further emphasised that no-one in the UN promoted a two-state solution. There are six main chapters in the negotiations: (1) government and power sharing; (2) property; (3) territory; (4) economy; (5) EU matters; and (6) security issues. Unlike sometimes claimed, all these chapters have been touched upon and discussed. Downer highlighted that the first chapter, which deals with governance and power sharing is the most important one for the long-term future of Cyprus. Although some political actors make claims to the contrary, details on this chapter – including the legislative, the executive, the judiciary, the electoral system and the rotating presidency – have been largely agreed upon.

When it comes to the second chapter on property, questions on what to do with the property left behind by the displaced people in the 1960s and 1970s remain open. An estimated 72 % of land on the Turkish side is owned by Greek Cypriots. Similarly, a considerable amount of land on the Greek side is owned by Turkish Cypriots. The two sides have different positions on the issue. The Turkish side holds that it is the current dwellers that should have the final say while the Greek side argues that three options should be made available for the actual owner: (1) restitution; (2) compensation; or (3) exchange. The Turkish side finds this solution unsustainable as it would not comply with the idea of creating a bi-zonal, bi-communal system in Cyprus and would also result in people getting evicted from their homes.

As regards the third chapter, on territory, it is unforeseeable that Greek Cypriots would accept to cede anything more than agreed in the Annan Plan. This is something that the Turkish Cypriots must take into serious consideration. The chapters on economy and EU matters are mechanical in nature, dealing with issues such as VAT payments. These chapters should be fairly easily agreed upon. Security issues on chapter six concern the Treaty of Guarantee that was an integral part of the 1960 constitution, which gave Britain, Greece and Turkey a right to intervene militarily in the island’s affairs. Turkish Cypriots would like to see the Treaty to remain in place and receive their security guarantees from the Republic of Turkey while Greek Cypriots find this arrangement difficult to accept. Further reconciliation is needed on this question.

In his conclusion, Downer stated that although a lot has been achieved during these 21 months of intense negotiations, more work is still required. With the more conservative Derviş Eroğlu of the National Unity Party taking office as the new president on Northern Cyprus, there are fears that the negotiations may slow down. But both the UN and the Turkish government are committed to finding a solution to the question. Downer reminded that on Cyprus mere commitment to finding a “solution” is not enough but one needs to be ready to negotiate an agreement that is acceptable to both sides. Negotiations cannot, after all, continue forever. Turkish Cypriots would like to see a solution by the end of this year while Greek Cypriots are not willing to commit to any strict deadline. However, with Greek Cypriot elections and Turkish general elections coming up next year, it is unlikely that a solution could be found should the negotiations drag on until then. “Think first, talk second” was Downer’s final message to all the parties involved in Cyprus. There are two perspectives on the issue that both deserve recognition and respect.

Mr Jaakko Blomberg began his comments by replying to the seminar title of whether this is the last chance: it is not, because the UN cannot afford to stop trying. After all, the Cyprus issue belongs to the UN framework. At the same time, Blomberg reminded, Cyprus is a member of the EU. Added to this, Turkey is a candidate country to the EU which makes the whole situation a complicated affair. Having made a commitment when accepting Cyprus to become a member of the Union to aim towards unification, the EU is in a difficult position. In short, there are three international tracks that are involved in the issue: (1) The UN framework; (2) The EU framework; and (3) EU-Turkey accession negotiations. EU-Turkey negotiations are an additional reason why the dispute should be solved by the end of the year.

In the Q & A section it was inquired what message Downer planned to deliver in his meeting with the Security Council on 10 June and whether arbitration will return to the agenda. It was also inquired whether the northern part of Cyprus lessening its close links with the Republic of Turkey could be a solution to the outstanding problem and whether a system based on a confederative structure could come into question. Further questions on the impact of grass-roots campaigning and demographic shifts on the possible future referendum and Turkey’s ruling party, the AKP’s position on the Cyprus question were posed.

In his reply to the questions, Downer started by saying that he has not decided his message to the Security Council yet but will most probably emphasise that enormous political will is needed for the process to move on. Greek Cypriots have rejected the idea of arbitration and there is no point in forcing an agreement upon them. After all, Cypriots themselves are the best experts of their politics. The UN must be very mindful of what it does on Cyprus. Downer reminded that the blame on the Cyprus issue lies equally on both sides. There are some Turkish Cypriots that are in favour of a confederation but this is not on the cards. The initial deal in 2008 was to create a federation and neither the UN nor Greek Cypriots are willing to compromise on that. When it comes to Turkish Cypriots having affection towards the Republic of Turkey, they are not alone. Also Greek Cypriots have emotional ties with Greece. But there still exists a distinctive Cypriot identity that includes common heritage and history. Due to the presence of over 40.000 Turkish troops on the island and Turkey being the guarantor of northern Cyprus, it is obvious that Turkey plays a slightly stronger role in the lives of Turkish Cypriots than Greece does on the southern part of the island. But whether this is a good or bad thing, is not for outsiders to judge. If one really believes that Turkish Cypriot policies are dictated straight from Ankara, it would certainly make sense to take that into consideration in the negotiations, Downer ironically pointed out.

There has not been a tremendous amount of grass-root campaigning to prepare for the possible referendum on an eventual agreement. On estimate about 30% of voters on the Turkish side and 32-33% on the Greek side are against an agreement, regardless of its content. On the whole island about a quarter of voters would vote for any agreement and the rest, approximately 50%, would decide after knowing the details of the package. It is very unlikely that either the Greek or Turkish government would oppose a deal reached by both sides, Downer added. Settlers, including Turkish students, guest workers and other immigrants, have altered the demographics of the north of Cyprus. There are an estimated 60.000 settlers in the north of Cyprus but no official census has been taken. President Christofias would be ready to accept 50.000 settlers (presumably excluding students and guest workers) but the questions of definition and of what to do with those possibly exceeding the quota remain. According to Downer, in any case the only humane way to entice people to move is to offer them financial incentives. He further reminded that should there be no agreement, it is very likely that the number of settlers would grow.

Dr Tiilikainen closed the event by thanking the speakers and audience for their participation. 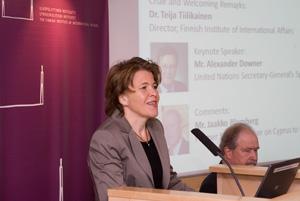 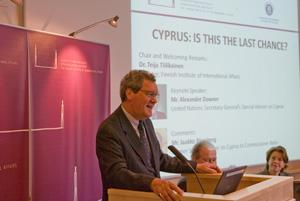 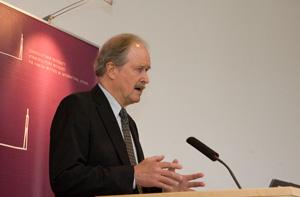 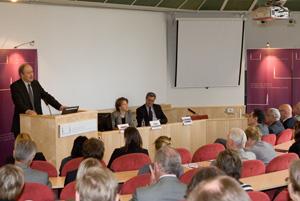