The European Union is launching a new strategy, under the moniker of EU 2020. It promises to usher in a full recovery from the crisis, while speeding up the move towards a smart, green and sustainable social market economy. But, is it like its predecessor, the Lisbon Strategy, destined to be a strategy with no teeth and slim results? When it comes to the EU economic policy co-ordination, can EU 2020 reconcile the irreconcilable?

Mr. Kajaste will comment on the EU 2020 strategy from a Finnish perspective, offering a critical analysis of the strategy’s opportunities and challenges for Finland. Mr. Kajaste is responsible for Finnish economic and structural policy planning.

Prof. Lund will comment on the EU 2020 strategy’s potential to speed up green growth and create sustainable energy transition possibilities. He is Professor in the Department of Applied Physics at Helsinki University of Technology. He was chairman of the Advisory Group on Energy of the European Commission (2003-2006).

In his keynote speech, Dr. Iain Begg discussed how to “reconcile the irreconcilable” in relation to the EU 2020 strategy. Demographic change, the necessary shift to a low-carbon economy and globalisation will very much shape the future of Europe. Begg offered three scenarios for post-2010. In the first scenario the current economic crisis is a mere bump in the road and recovery takes hold quite rapidly. The second scenario was a pessimistic one; in it the recession endures and Europe experiences a similar ‘lost decade’ as Japan did in the 1990s. The third scenario was about introducing a new model in which the economy is reshaped by active intervention. Next Begg presented the Commission’s EU 2020 themes: (i) Creating value by basing growth on knowledge – a strong focus on innovation; (ii) Empowering people in inclusive societies; and (iii) Creating a competitive, connected and greener economy. The Commission paper is, however, weak in explaining ‘why Europe?’, Begg argued. Why should these things be decided on a European level?

What, then, needs to be reconciled? Macroeconomic aims, supply-side reform and distinctive models of social and including labour, financial systems and regulatory traditions all in a single, credible and successful co-ordination process, Begg explained. Perhaps a fitting metaphor for the Lisbon Strategy could be Mark Twain’s quote of Wagner’s music being better than it sounds, Begg joked. Post-2010 governance challenges are the reconciliation of different EU processes, fostering political commitment and ownership, and creating a power balance between member states, sub-national and EU levels. Finally, the key questions for the EU are how to define a post-2010 narrative for policy; whether to choose a one-size-fits-all approach or differentiation; how to create joined-up governance for EU 2020 and make the budget and ‘Lisbon’ work in tandem; as well as how to define the EU’s role and create strong political leadership. Begg’s final message to policy-makers was that reconciliation is a tricky balancing-act.

First to deliver his comments was Mr. Ilkka Kajaste. In his presentation Kajaste analysed the EU 2020 strategy’s opportunities and challenges particularly from a Finnish perspective. Kajaste commenced his presentation by noting that the EU 2020 strategy is vital for effective economic policy coordination. The current Greek economic crisis is a result of non-compliance with strategic EU-objectives, which has led to a trend-like deterioration of competitiveness and mounting external imbalances and public indebtedness, reflecting a lack of structural reforms. Kajaste further noted that a persisting trend of divergence has continued inside the Euro area. It has been recognized by the Commission and the Council. However, no action has been taken to reverse it. This is the challenge of the EU2020 strategy. The economic and financial crisis has affected EU growth potential so that the Lisbon targets have become increasingly distant. The renewed strategy should be linked to the current crisis in order to enhance its impetus. There is, however, significant divergence in competitive positions of EU member states. For example, Germany has been able to increase its competitiveness while some other states’ competitiveness has decreased. Kajaste stated that Finnish EU-policies are driven by pragmatism. Deepening the internal market and strengthening economic policy coordination are the key. In the internal market the main focus should be on services, information technology and energy. Economic policy coordination should focus on bold measures to point out structural weaknesses as well as make use of conditional structural funds and intelligent coordination of tax policies. Finally, according to Kajaste the key points are European Council leadership; national governments’ ownership; country specific strategies; a growth accounting approach; focus on impediments to growth; benefits of deeper integration; risk of distortions and protectionism in the internal market; common interest including pre-ins in the Euro area; and the crisis as an opportunity to reconsider the strategy.

Next to deliver his comments was Dr. Peter Lund. Lund discussed the EU 2020 strategy’s potential to speed up green growth and create sustainable energy transition possibilities. Lund first argued that in the current emergency situation of Europe declining, innovation should be the basis of the EU 2020 strategy. There are three priorities for sustainable growth and jobs: (i) Growth based on knowledge and innovation; (ii) An inclusive high-employment society; and (iii) A competitive and sustainable green economy. Doubling the use of renewable energy to 20 % by 2020 could generate 90 billion Euros of additional investment and 700,000 new jobs. The European Strategic Energy Technology Plan (SET-Plan) will be the technology pillar of the EU’s energy and climate policy. While for example the United States and China already have similar plans and are leaders in several fields of new energy technologies, the vision is novel in Europe. European governments play an important role in turning the vision into reality. Climate change mitigation requires an energy revolution and the European Commission should prioritise technology, Lund argued. When it comes to clean technology, Indians are focusing on affordability, Europeans on regulation. Spending on clean technology between the EU and the US differs significantly, 3 billion and 20 billion respectively. Given these circumstances, Europe is only able to narrow the gap, not to lead. Next Lund moved on to introduce the idea of ‘creative destruction’ by Joseph Schumpeter, the “Adam Smith of innovation”: Creative destruction is about innovation; innovation destroys what is ineffective and creates new, more efficient ways. Recycling labour from old and redundant jobs to new ones in fact creates more jobs. Green energy and increased efficiency will create 20 million new jobs by 2030. In Finland 30.000-40.000 new jobs are possible if energy decisions fully rely on domestic technologies and know-how. To achieve this governments use fiscal stimuli. According to Lund, fundamental issues that need to be addressed in the EU 2020 strategy are: (i) from vision to concrete measures; (ii) From input to impacts; (iii) Financing; (iv) Coordination and integration; (v) Cooperation; (vi) Commercialization and managing innovation chains; and (vii) Pace and development. Are we however, Lund finally inquired, hungry for growth? Indians and Chinese with their bellies empty want to grow and fill their bellies but Europeans with their bellies already full might be too comfortable to crave more growth.

After the presentations, Tiilikainen opened the floor for questions. Mr. Alex Luta inquired whether the panellists would see EU energy policies having a similar outcome – a nominal consensus – as was seen in the Copenhagen Climate Summit. Tiilikainen, for her part, wanted to know if lessons had been learned from the Lisbon Strategy to better implement the new strategy. The following questions compared technology know-how in India and Finland and inquired how we could wake up in Europe and Finland to avoid completely losing the global competition in technology; and asked how to make innovation work better in Europe and how to move from strategy to policy. Paavo Mäkinen asked if the increased rate of retirement could be one reason for the surprisingly low unemployment rates in recession-hit Europe. Referring to Lund’s presentation, he further inquired why we should eat more if our bellies are already full. Heikki Holopainen asked how the missing link between the EU 2020 strategy and the EU budget could be solved.

Begg began by pointing out that the Copenhagen Summit can also be seen a success in that it was a European agenda that was discussed in the meeting. The key issue in the EU 2020 strategy is indeed, he argued, implementation. There is a mutual learning programme in Europe where different member states learn to learn from each other. For example employability and flexicurity were not so long ago alien concepts in France but are now in the mainstream agenda. When it comes to comparing India and Finland, one has to remember that they cannot be directly compared given that there are over one billion Indians and just over five million Finns. High level of retirement has not, Begg argued, been a reason for the surprisingly low level of unemployment in recession-hit Europe. Finally, the main reason for the budget being disconnected from the EU 2020 strategy is that it is decided in unanimity. In his reply, Kajaste pointed out that the EU is doing the same mistakes with the EU 2020 strategy as with the Lisbon Strategy in 2000. In 2000 there were great expectations and everyone wanted to be part of the project. In 2010 expectations are again great and everyone wants to be part of the process. What is needed is strong leadership and clear priorities. We need to focus on real convergence. As to the budget, Kajaste agreed with Begg that unanimity in budgetary decisions prevents a proper link with the EU 2020 strategy. In his reply, Lund argued that oil prices might be going up soon and that we have to prepare ourselves to life after oil. When setting our goals at this point, we should be looking towards 2050 rather than 2020. New technology might soon become cheaper than old technology. Europeans should cooperate more with India who is focusing on affordable innovation and China who is producing in large scale. When it comes to our bellies being full at the moment, we need to continue to grow, otherwise our bellies will soon be empty. Poverty is not a virtue; as rich we can do more and help others. In regard to the budget, the key is to link member states’ budgets; member states should be more integrated.

Mikko Tyrväinen began the next round of questions by asking what kind of role the EU could have outside its borders. Begg offered three reflections on the EU as an international actor: (i) The EU should shape rather than submit to globalisation; (ii) Energy strategy is about foreign policy; and (iii) Successful Europe creates demand. Begg further pointed out that although Europe’s share of the world economy will decrease, we should not be too worried; comparing us to our counterparts in other parts of the world, we are still in a very privileged economic position and poor countries making relative economic gains is a positive and equalising factor. Begg’s final point was that substituting old jobs with new ones can be a challenge in that those currently working in ‘old’ trades might not have the suitable skills to take up jobs in ‘new’ trades. Lund, for his part, argued that the EU’s neighbourhood policy will become very important in the future. Clean technology will create more jobs and lead to a better future.

Tiilikainen concluded the seminar by thanking the speakers and audience for their participation. 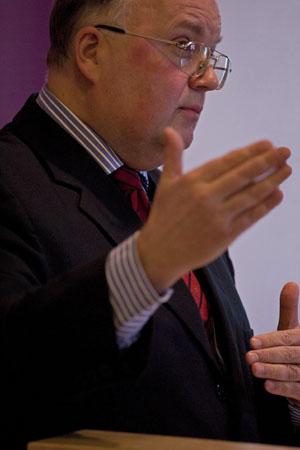 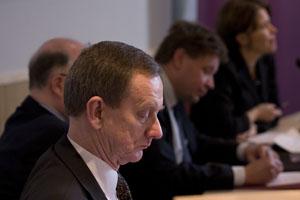 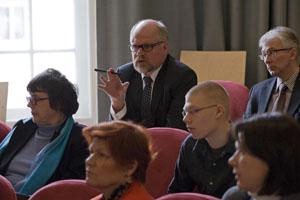 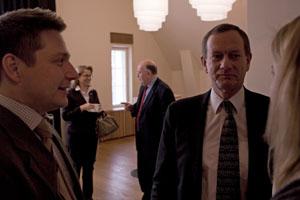 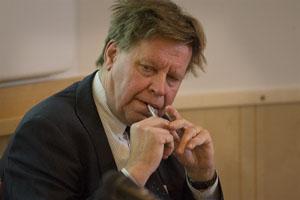 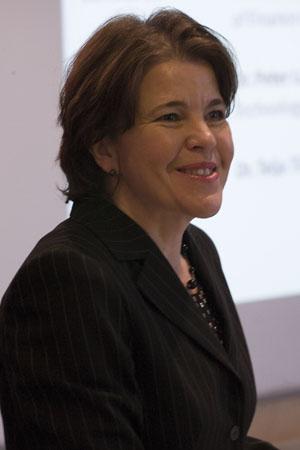 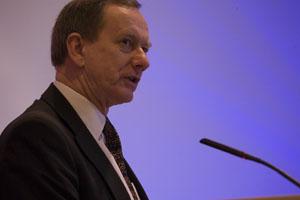 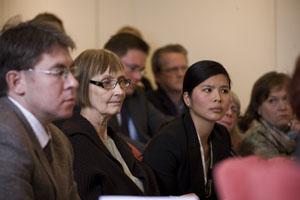