T.V. Paul stated that his presentation would be based on the findings of the Globalization and the National Security State Project (GNSS). The idea behind GNSS is the thesis that economic globalization weakens the state. The state’s major purpose has been that to provide protection. Is it still so? – asked Paul. There have been several steps towards the weakening of similar traditional elements.

The propositions of GNSS are based on existing works. A few major ones outlined by Paul were: changing national security perceptions including non-traditional threats and hard balancing is being abandoned in favor of soft balancing. National military doctrines have dramatically changed from offensive to defensive. States are seeking security through international and regional institutions. But “are these theories weighty?”. There is tendency to look at the world as a whole – but, this is not so. Globalization brings different results to different people.

To illustrate this, GNSS has developed four categories of states. The first category consists of major powers. The second category is ‘cooperative regional subsistence,’ such as the EU. The third category is conversely ‘competitive regional subsistence’, largely the Middle East and South East Asia. The last category is ‘weak, failed, or failing states’ – most of Africa. Differences are discernable with these states, and even in groups within states. This differentiation is not necessarily accurate or precise, but it is needed.

This has led GNSS to a few tentative findings on the questions posed earlier. There is little evidence that globalization has changed security perceptions. Conventional military means remain used, even though a change may be desirable. Defense spending has begun to rise again, spurred on by globalization, by generating additional wealth. Most states retain doctrines for inter-state war.

Globalization has had an effect, but unequally. Europe has most embraced these changes, but faces no real threat – states that face threats have conversely been less enthusiastic to change. Major powers are non-traditional security states, but maintain formidable conventional power. Globalization has most affected failed sates, and they are also the ones to least benefit from it. Globalization has led to the growth of private actors and worsened problems. Sub-Saharan problems, however, are not solely to be blamed on globalization but on state failure.

Concluding his presentation, Paul stressed that globalization has had uneven effect on national security. The increasing scope of threats has failed to change past ways. States are trying to adapt, but are doing so with varying success. Paul also stated that the state system will not only survive globalization but become even stronger.

The audience was given the chance to present their own questions. The questions varied from the impact of globalization on nationalism, financial markets, and closed states, on the end of hard balancing, and how to make EU a major power.

In his replies Paul reiterated that states were still the key actors, despite the effects that globalization has had on the security dynamics between states, and that there was a strong need to differentiate, rather than lump together, states when discussing globalization and state security. 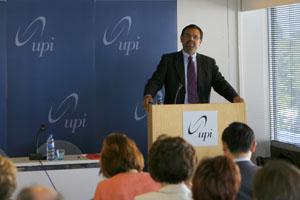