Being one of the world’s largest economies and most populous countries, India’s increasingly important role in regional and global affairs is uncontested. Against the background of a rising China and a shifting US stance in the Indo-Pacific region, India has shown robust economic growth, a stronger involvement as a security player, and a more prominent engagement in global governance. In geo-strategic terms, India is building strong relations with major powers, and seeking partnerships within the region and its extended neighbourhood through the pursuit of a pragmatic foreign policy, while continuing a complex relationship with China. At the same time, however, India faces challenges as for economic competition, maritime security, and defense relations with other states in the region. The threat of terrorism in the South Asian region and long-lasting tensions between India and Pakistan have an impact on regional security.

How will India position itself against the background of rising US-China rivalry in the Indo-Pacific including China’s Belt and Road Initiative? How will the slow-down of India’s economic growth affect New Delhi’s capacity to compete with other powers in the region and further away, including in Africa? How can tensions in relations between India and Pakistan be avoided and how would the looming peace process in Afghanistan impact on that? How can the EU work closer with India in order to promote peace and security, inclusive economic growth, and sustainable development? 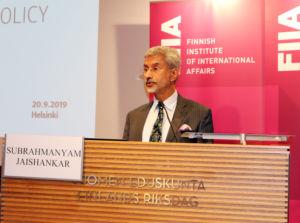 Dr. Subrahmanyam Jaishankar is External Affairs Minister of India. Earlier he was President at Global Corporate Affairs at Tata Sons Private Limited from May 2018. He was Foreign Secretary from 2015 to 2018, Ambassador to United States from 2013 to 2015, Ambassador to China from 2009 to 2013, High Commissioner to Singapore from 2007 to 2009 and Ambassador to the Czech Republic from 2000 to 2004. He has also served in other diplomatic assignments in Embassies in Moscow, Colombo, Budapest and Tokyo, as well in the Ministry of External Affairs and the President’s Secretariat. Dr S. Jaishankar is a graduate of St. Stephen’s College at the University of Delhi. He has an MA in Political Science and an M. Phil and Ph.D in International Relations from Jawaharlal Nehru University, Delhi. 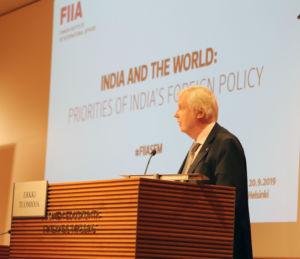 Member of the Parliament of Finland

Dr. Erkki Tuomioja is a Member of the Parliament of Finland with the Social Democratic Party. He has been Minister for Foreign Affairs from 2011 to 2015 and from 2000 to 2007. He was a Chairman of the Grand Committee (EU affairs) from 2007 to 2011. He was also a Minister of Trade and Industry from 1999 to 2000 and a Vice-Chairman of the SDP Parliamentary Group 1991-1996 and Chairman 1996-1999. Tuomioja worked as a journalist before being elected to parliament. He was Deputy Mayor in Helsinki 1979-1991. He has a Ph.D. in political science, B.Sc. in economics and holds a lectureship in political history in the University of Helsinki.

Video recording of Q & A above.