Seminar with the Finnish Institute of International Affairs
Helsinki, March 20, 2006

A summary of Dr. Rubin’s speech

Dr. Michael Rubin, resident scholar at the American Enterprise Institute and editor of the Middle East Quarterly visited the Finnish Institute of International Affairs on March 20, 2006 and spoke about the United States’ view of the Iranian nuclear program. As background, Dr. Rubin emphasised that he does not represent the official policy of the United States but that this could be seen as an asset as he could speak more freely about the whole issue.

Dr. Rubin reminded the audience that the context to this political conflict is a number of unresolved issues between Iran and US that date back to the 1979 revolution in Iran. According to him, the United States has three main concerns about Iran: the democratisation process, terrorism and weapons of mass destruction – in particular nuclear weapons – but that in this presentation he would concentrate on the nuclear issue. Dr. Rubin argued that Iran has both had problems with its cooperation with the International Atomic Energy Association (IAEA) and, secondly, that Iran has been known for its ”continuous cheating” in the past regarding the inspections of the IAEA.

Washington’s perspective on the Iranian nuclear issue can be seen in the recent National Intelligence Estimate, which says that Iran is approximately 5-10 years away from its own nuclear weapon. As the terrorist attacks in New York in September 2001 showed, the enemies of the United States are not dependent on long-range missiles to launch attacks against the United States. At the same time Washington sees Iran as a nationalist, non-status quo power driving for Islamic revolution beyond its borders. These factors are, according to Dr. Rubin, influencing the debate in Washington over whether the United States can afford to take the risk that Iran might develop a nuclear weapon of its own.

In Dr. Rubin’s view, a possible Iranian nuclear weapon would not necessarily be used against other countries but as deterrent allowing Iran to attack other states (either conventionally or through state-sponsored terrorism) without fear of reprisal. Also according to Dr. Rubin, the international community has underestimated the role of domestic politics in Iran’s nuclear program: while the popularity of the current regime has declined, the nuclear program enjoys the public support in a country torn by factional politics.

When talking about the ways to solve Iran’s nuclear issue, Dr. Rubin said that negotiations, diplomatic sanctions and military action are all possible. In the ongoing negotiations the United States share the view of EU-3 that diplomacy is the best way to solve the question. However, he reminded the audience that diplomacy works best with some kind of threat behind it. Sanctions, even so-called ”smart sanctions”, are difficult to enforce in the best of times, but seem unlikely at the moment due to the currently very high global oil prices.

In the case of military action, the strategy used in Iraq would be out of the question, said Dr. Rubin. A more likely strategy would be limited military strikes on nuclear facilities by the navy and air force, as these services are not overstretched as the US Army currently is due to its involvement in Iraq. The political cost of an attack like this would be high, but the question for the decision-makers in Washington would be to compare those costs with the costs of a nuclear armed Iran.

Nevertheless, Dr. Rubin believes that there is still room for a diplomatic way to solve the issue, if the United States and the European Union agree on the problems involved. He did express his concern that the ’Western’ position is still not unified: within the US there are still discussion over the extent to which it should rely on unilateral or multilateral efforts to resolve the crisis, whilst within the EU, despite the EU-3 (Germany, France, UK) seeing this as a test case for European Union foreign policy, other EU members do not share their depth of concern over the matter.

After the presentation a lively discussion followed, during which such topics as direct diplomatic actions of the United States, the controversial rhetoric of the president Ahmadinejad as well as Iran-Pakistani relations were discussed. When talking of the first, Dr. Rubin emphasised that the United States is not ruling out direct contacts with Iran, but these kinds of discussions should include all unresolved issues between the two states, not just the nuclear question. 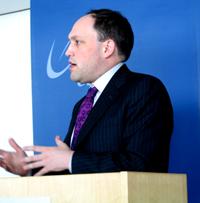