The Middle East has been a scene of major changes and turmoil during the recent years. The uprisings and the post-Arab Spring changes, such as the civil war in Syria and the rise of terrorism, have significant implications for the region. The peace process between the state of Israel and the Palestinian Authority has been stalled for a long time and the immediate tensions run high. How is the current situation perceived in Israel? How do the Israelis feel about criticism of their government’s policy? What could be the EU’s role in solving the Israeli-Palestinian conflict?

Ben-Dror Yemini studied Humanities and History in Tel Aviv University, and later on Law. After a short term in the public service, as the advisor of the Minister of Immigration and the spokesman of the Ministry, Yemini began his career as a journalist and essayist. He also worked as a lawyer and was a partner in a law firm. In 2003 he became the opinion-editor of the daily newspaper Maariv and also published many articles and essays in other journals. In recent years Yemini has published a series of research articles about the Israeli-Arab conflict.

Hannu Juusola is Professor of Middle Eastern and Semitic Studies at the University of Helsinki and the former Director of the Finnish Institute in the Middle East (FIME). His current research interests include citizenship discourses, secularism and democratisation in the Middle East.

The Israeli columnist Ben-Dror Yemini begun his presentation by telling about his experiences regarding the peace process, and his disappointment with the failing of it. What he is most disappointed with is, according to him, ”a campaign of lies”, a popular narrative where Israel and the Jews are portrayed in a demonizing manner, as the villain of the conflict. In this narrative Israel is presented as the main cause of violence in the world, even though the Israeli contribution to overall violence in the world is statistically very small. Yemini also pointed out the far larger numbers of people killed by jihadist terror recently. He also reminded how tiny Israel is compared to the Arab world.

Yemini also made several remarks about the history and how it is represented, referring to the little known Faisal-Weizmann Agreement of 1919 that purportedly recognized the development of Jewish homeland in Palestine and the building of the Mandate system in general. He also addressed Nakba (the so called Palestinian catastrophe), admitting that people were forced out of Palestine but pointing out that population transfers of that kind were an international norm in the creation of nation-states at that time. Still, Yemini emphasized that he would not support that kind of actions presently, nor denies the suffering of the Palestinian people. However, according to him the forced population transfer of Palestinians is over-emphasized compared to many other population exchanges and refugee problems during 1913-1995, while the pogroms and expulsions of the Jews in 1940s in the Arab countries tend to be forgotten.

Yemini also raised the problem of two varying UN definitions of refugee status, and concluded his presentation with the reference to the Clinton Proposal to resolve the Israeli-Palestinian conflict, which he would support, and which Arafat rejected.

In his comments Wolfgang Mühlberger first raised the question of anti-Semitism, calling attention to the problematic trend of Western parties that have roots in anti-Semitism teaming up with Israeli right-wing parties. Regarding the mentioned Faisal-Weizmann Agreement, he pointed out that it is less known in part because Emir Faisal was at the time not the actual leader of the Arab world, and his authority over Arabs was very limited.

Regarding the making of comparisons, Mühlberger also raised the question of who does Israel want to be compared to, the Arab world or Western countries, when setting standards. He also noted that the stronger party has a better ability to increase confidence when seeking the resolution of conflict, and while Israel is a small country, nevertheless it is militarily a very powerful one, and not really threatened anymore by Arab states. According to Mühlberger, Israel is very capable of managing its security environment, but how it handles it, including the question of Palestinian statehood, is a question of political will. He also raised a question of what kind of peace are we talking about, when we are talking about peace: the status quo, or something else? Eventually he raised the issue of threats directed against critical intellectuals and academics, who have been revisiting the standard narratives of Israeli history.

In the general discussion, a critique towards Yemini’s presentation was raised on grounds that while he says that he stands for peace, his presentation was not building bridges for peace, but focused more on the cleaning of Israel’s image. Regarding the comparisons of standards, it was pointed out that killings cannot be justified with others doing more killing. There were also questions about the Western academic society’s role in the de-legitimization of Israel and about the problematic demands of the right to return of Palestinian refugees, that Yemini believes to be unacceptable for Israel, because it would danger its existence as a Jewish nation-state, and thus, according to him, represents a major obstacle for peace. 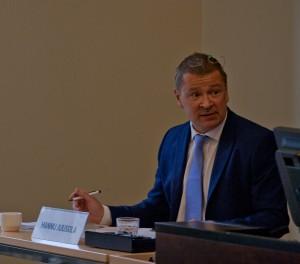 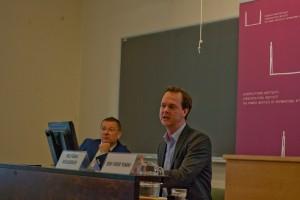 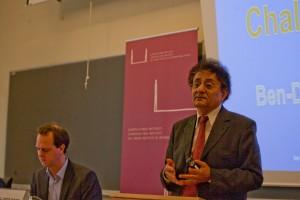