Framsida / Evenemang / Japan’s New Policy on Collective...
Dela med andra
Dela med andra
Japan has a so-called ”peace constitution” since Article 9 prohibits Japan from having any war potential per se. Because of this, and despite Article 51 of the UN Charter, Japan has imposed a ban on exercising the right to collective self-defense. On 1 July 2014, however, this interpretation was changed due to a cabinet decision under Prime Minister Abe. It is now possible to exercise the right of collective self-defense in principle, details of which are expected to be determined in the current and maybe subsequent sessions of the Diet (Parliament). This is a hotly debated topic in Japan and neighboring countries are carefully watching the developments. In order to better understand the controversy, the presentation will first provide a brief historical sketch on the now erstwhile constitutional interpretation. Secondly, the three conditions under which this right can be exercised will be explained. They are carefully worded conditions and a result of a compromise between the ruling coalition partners. Lastly, the presentation will offer some concrete instances of operations that Japan can now perform, such as a dispatch and rescue mission.
Speaker:
Toshitaka Takeuchi, Professor, Osaka University
Toshitaka Takeuchi is Professor at the Osaka School of International Public Policy (OSIPP), Osaka University. His research topics include national security, nuclear deterrence, China’s military power, and the application of game theory to political behavior. Formerly he has worked as Legal Adviser for the Delegation of Japan to the Conference on Disarmament at the Ministry of Foreign Affairs, taking part for example in the Comprehensive Test Ban Treaty (CTBT) negotiations. Recent publications include Understanding International Relations: The world and Japan (ed.) (University Education Press, 2013), Game Theory for Policy Analysis (Minerva, 2011, in Japanese) and The Japan-US Alliance (ed.) (Minerva,
2011, in Japanese).
Comments:

The event was opened by its chair Dr Mika Aaltola who said that the topic, Japan’s collective self-defense, is vital for anybody who knows about the region and current events in Japan. It is a long-standing debate and now finally there is a movement.

The keynote speaker of the event Professor Toshitaka Takeuchi focused his presentation on Japan’s new policy on collective self-defense. According to erstwhile interpretations of Article 9 of Japan’s constitution, Japan cannot exercise collective self-defense even though as a sovereign state it has that right. However, on July 1, 2014 the cabinet issued a re-interpretation in order to enable Japan to exercise the right of collective self-defense. According to Prof. Takeuchi this cabinet decision was a compromise between the political parties – the wordings of the original draft were made more restrictive and clearer, even though he also agreed with the criticism about the hasty process preceding the decision. Prof. Takeuchi noted that Japan’s constitution was written under occupation and there have been different interpretations concerning Japan’s right to self-defense.

Prof. Takeuchi concentrated in his presentation on the general perspective because the topic is still ongoing and nothing has been decided. The cabinet decision is political and the legislative decision will be taken by the National Diet

(parliament) during 2015. This decision will form the re-interpretation in detail and only then it is known what it will mean concretely. Basically the re-interpretation would allow Japan to exercise the right of collective self-defense under three
conditions: 1. in case where a nation with close ties to Japan comes under attack, and there is a clear threat to the Japanese state or could fundamentally threaten the Japanese people’s constitutional right to life, liberty, and the pursuit ofhappiness, 2. if there are no other appropriate measures to fulfil its duty to ensure Japan’s existence and protect its people, and 3. if the use of force is limited to the bare minimum necessary. Prof. Takeuchi emphasised that the re

interpretation does not propose participation in collective security measures by the UN that utilize physical force or dispatch of the SDF (self-defense forces) for combat purposes and it is not proposed any changes concerning the bare minimum necessary condition for self-defense. This is what the government explained, and for the near future this stands. However, doubts remain about the long-term effects of the cabinet’s decision.

Dr Bart Gaens and Ms Katja Creutz commented on Prof. Takeuchi’s presentation. According to Dr Gaens the re-interpretation of the constitution is highly significant as it points towards a new policy line: since 1954 Japan’s government has maintained that collective self-defense exceeds the minimum level of self-defense. This change means that Japan is gradually taking steps towards becoming a ”normal military country”. There have been also other changes in Japan’s overall defense policy. All these changes are fairly minor and include strict limitations, but together they form a land mark change. Dr Gaens also posed two questions to Prof. Takeuchi: 1. Prime Minister Abe and his party wanted firstly to revise the constitution rather then re-interpret it. When he did not receive sufficient political support he tried to make the revision process easier. When that too failed, the cabinet ended up re-interpreting Article 9. Can this not be criticized as an abuse of executive power? The second, related question concerned popular support. Opinion polls show that Prime Minister Abe’s support rate went down, and also that the re-interpretation of the constitution has not been explained to the public well enough. Can we speak of a democratic deficit? Prof.Takeuchi answered these questions by saying that the cabinet has only made a political decision and the Diet will deal the issue legislatively, so no laws have been accepted yet, and so far the discussion has been on an abstract level. Prof. Takeuchi also said that the government is not aiming for the offensive self-defense policy, but it was not possible for Japan to amend the constitutional law because of the public opinion so the re-interpretation was the only possible way to proceed with the issue.

Ms Katja Creutz commented on the presentation of Prof. Takeuchi from the perspective of international law, and from this perspective there are no problems with the re-interpretation of the constitution. Ms Creutz brought up two similar cases in which restrictions on defense policy based on international agreement, have been re-interpreted unilaterally, because of the changed situation: Finland in 1990s and Kosovo in 2014. From the perspective of international law, collective self defense is a right of a state and this means that Japan is always entitled to change the interpretation. Any regime restricting a state’s military capabilities can be re-modified, and according to Ms Creutz this re-interpretation only makes Japan a normal military state, the change does not mean that Japan would be a threat. Ms Creutz noted however that a constitution should reflect the people’s will, and in this case the people may have an idea of a pacifist state whereas  the government seems to have a different idea – in this sense stretching the constitution, as was done now, is not ideal.

In the end the floor was open for questions and comments that concerned for example relations between Japan and other areas or countries and the influence of the US in the changes in the Japan. 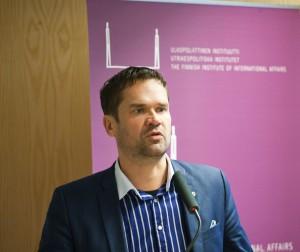 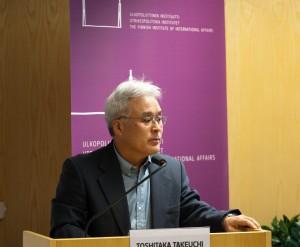 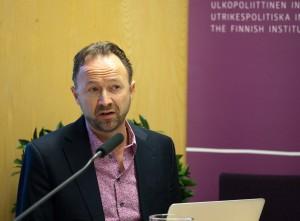 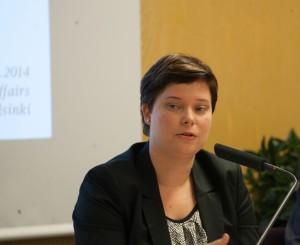