NATO has a somewhat permanent position amongst the hottest security policy related topics of public discussion in Finland and its fortunes in Afghanistan have only added to the importance of this discussion. As an organisation, NATO is revered for its ability to adjust itself to changing circumstances, even to major transformations of the global political order. Currently, the situation in Afghanistan is undoubtedly the greatest challenge NATO is facing. Will NATO be able to find a winning formula for calming down Afghanistan?

Michael Rühle is currently Head of Speechwriting and Senior Political Advisor in the NATO Secretary General’s Policy Planning Unit. Since he joined NATO’s International Staff in 1991, he has been responsible for drafting speeches and articles for the Secretary General and other high-ranking NATO officials. He has been involved in the drafting of communiques for meetings of NATO Foreign Ministers and NATO Summit Declarations. In addition, Mr. Rühle has published extensively on transatlantic security relations, notably on NATO issues and on nuclear proliferation. He has also co-authored a book on missile defence.

Michael Rühle: The topic of the seminar is about NATO’s role in Afghanistan. However, due to 080808 and the following events in the Caucasus and elsewhere, discussion about NATO and its role in itself has certainly increased. Ukraine wants to speed up its joining in NATO and so does Poland, which has agreed to station American missile defence system on their turf. In addition, there remain numerous other challenges and threats, such as cyber warfare, climate change, nuclear proliferation and energy security which all require global cooperation. So far, NATO’s role in providing security in Europe after the Second World War and also after the end of the Cold War has been very important. Despite the rising stars on the international realm, no other group except the trans-Atlantic community, which NATO has fostered, has the moral leadership to solve the aforementioned issues. During the last 60 years, NATO has gone through three stages: the Cold War era, during which Nato’s role was mainly static – it provided security against the Soviet threat. The second era was the post-Cold War era when NATO provided both support and security to the process of consolidating Eastern Europe peacefully. The third era, which is global in nature, began in 9/11. This development has widened NATO’s character and its new role includes not only military, but also civilian and humanitarian missions. Furthermore, the new missions include cooperation with a variety of NGO’s and other actors. Afghanistan is part of this new curriculum. It is NATO’s role to provide security on the ground so that development and economic growth can take place.

Raimo Väyrynen: NATO’s civil-military operation in Afghanistan can certainly be justified in terms of conflict management and the need of comprehensive cooperation among international actors. The question is: has NATO been successful in this. Security on the ground is the critical factor without which there is no development. As NATO tries to achieve this through increased cooperation with other international organisations (UN, EU), it is in the danger of undermining its military effectiveness due to scepticism of the other actors towards NATO’s emphasis on the military missions. NATO should perhaps focus solely on the security and military operations and let other organisations take care of the development and cooperation tasks. As NATO’s role is changing and the threat of full-scale war in Europe is decreasing, Afghanistan will provide a glimpse into NATO’s future role and the commitment of its members to its operations around the globe. As the war between Russia and Georgia shows, traditional security challenges have not disappeared from the world, especially if relations will remain tense between major powers. The dreadfully interesting question is: what would have happened had Georgia been a NATO member? Provided that the war would have taken place, would the other NATO countries have been willing to jeopardise global peace in an all-out war. The critical question regarding NATO’s development is following: how can NATO address this dilemma in a way that is satisfactory to both its smaller (perhaps more threatened) members with fears of abandonment as well as the major players with a fear of entrapment in an unwanted conflict.

Christian Jokinen: Afghanistan has had a uniquely violent history. As the recent killing of the ten French peacekeepers illustrates, violence and challenges remain in Afghanistan.

The most critical task is the normalization of the already pacified areas. The precondition to this, however, is to have enough troops on the ground as without security, any development is in vain. Presence should not be regarded merely as more troops but also as true interaction with the local population that would build trust among the parties. The challenge for NATO is where to find these troops, as the current air superiority can be counterproductive for the overall mission.

The insurgent groups do not constitute a monolith and many of the reasons for the conflicts on the ground are local in nature and can be settled using military, diplomatic and development tools. It is clear that pacifying a country (especially one with such a violent history), is not an easy task. It would be tragic to see the development achieved so far to vanish due to the low tolerance of casualties.

In the end, the empowering of the legitimate Afghan authority remains the core of the NATO mission and the only viable exit strategy.

Q: 60% of Afghanistan is in the hands of the Taliban. How successful is the operation?
A: The Taliban is not a homogenous actor and the fighters in the insurgency have very different reasons to fight the government. In addition, 60% of the country is in the hands of the tribes, not of the Taliban. Furthermore, most Afghans agree that the international forces are helping them, but the situation could clearly be improved.

Q: Would increased amount of development aid improve the situation on the ground?
A: Not yet. Security and stability have to be achieved first and no development can take place in the absence of security. More troops are needed for improved security. So far the question has been: how many can we offer, not how many do we need.

Q: How will the situation in Georgia affect negotiations on other issues, such as the climate change?
A: The sour relations will probably make interaction more difficult. 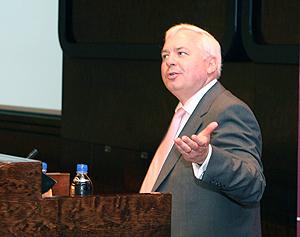 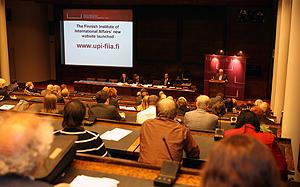 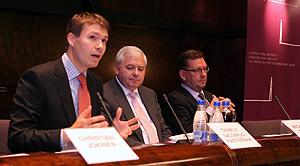 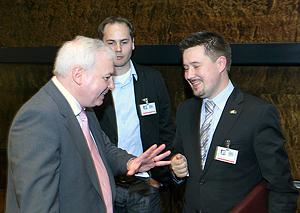