As the Kremlin believes that the global economic downturn increases the trend toward greater regionalism, the strategic conclusion is to strengthen Russia’s position as a center of its ”own region” – the post-Soviet Eurasia. Is Russia succeeding in its policies? What are the factors that strengthen or weaken its position? What are the implications for the West and Europe?

Dr Arkady Moshes opened the seminar by welcoming everyone to the seminar with an interesting and important topic — Russia’s relations with its Post-Soviet neighbours.

Chair, Mr Henrik Lax, started the session by saying that as a former Member of the European Parliament he knows more about the EU-Russia relations, and thinks that the main difficulty in the EU-Russia interaction lies in the divergence of strategic outlooks: Russia tends to perceive the relationship as a zero-sum game, while the EU perceives it as a win-win situation.

Mr James Sherr argued in his keynote speech that Russia’s policy toward its neighbours has changed after Russia’s victory over Georgia one year ago. A surprising fact is that Russia’s relationship with its neighbours has been worsening year after year and is now arguably at the all time low. The financial crisis exacerbates the situation, creating additional pressure, and the result – as, for example, in the case of Russia-Ukraine relations — has been that the pressure on Ukraine has increased – particularly in the sphere of the “energy geopolitics” involving the pipeline projects and gas transit system. But the more Russia tries to influence the Post-Soviet countries, the more they are doing just the opposite – drifting away from Russia. Ukraine is moving in another – Westerly — direction and therefore the threat to Ukraine and to its independence is now greater than it has ever been. Although the EU has now become more active in the region, there is still no revolution in EU strategic thinking. Mr Sherr concluded by saying that we should be bracing ourselves for more surprises in the relationship between Russia and its neighbours.

Dr Vadim Kononenko presented the Briefing Paper “Can’t Buy Me Love”: Will Global Economic Downturn Help Russia to Consolidate Its Influence in the Post-Soviet Eurasia? which he co-authored with Dr Igor Torbakov. Dr Kononenko stated that, as the Kremlin believes that the global economic downturn is increasing the trend towards greater regionalism, the strategic conclusion is to strengthen Russia’s position as the centre of its “own region” – post-Soviet Eurasia. In order to enhance its geopolitical posture in the ex-Soviet area, Russia has been pursuing a two-track policy: it is buying up assets from, and giving out loans to, its distressed neighbours on a massive scale. However, Dr Kononenko concluded, several forces appear to be working at cross-purposes with the Kremlin’s ambitions: the state of Russia’s own economic system; the wiliness and cunning maneuvering of Moscow’s “allies”; and the growing competition on the part of the other centres of power – the European Union and China.

Dr Arkady Moshes began his presentation in the panel “Russia and the Western CIS” by stating that the interest in Belarus as an object of study is gradually increasing. He contended that Russia’s interest in Post-Soviet space is crucial for Russia’s regional and global stature, and in that context Belarus matters almost as much as Ukraine. For Russia, Belarus is and important energy transit partner and military ally. Dr Moshes predicted that we will see a dramatic development in Russia’s and Belarus’ bilateral relations. Belarus is drifting away from Russia, which is a critical development for the whole Post-Soviet space. Russia knows that it can’t apply too much pressure on Belarus — otherwise Minsk would be even more tempted to turn towards the West. The new factor in the evolving relationship is that Russia is trying to “buy love” from its Post-Soviet neighbours and it has now to pay more for that. The other new factor is that the situation in Belarus has changed, too. The West has started to matter for Belarus more than ever before, and it is slowly becoming an Eastern European country – not just a post-Soviet state. Also, the EU has come to the region with its Eastern Partnership program, although the strategic vision of the latter leaves much to be desired.

Mr Aleksander Sushko in his presentation offered an analysis of Russia’s policy toward Ukraine. The most important task for Russia is the prevention of Ukraine’s joining NATO. Russia wants to gain more control in Ukraine. Moscow especially covets the country’s strategic infrastructure and, most of all, Ukraine’s extensive gas transportation network. Russia’s goal is also the prevention of the EU involvement in Ukraine so that the country won’t come closer to the EU. That explains why Russia is against the Eastern Partnership initiative. Russia’s general strategy is to get a stronger political bridgehead in Kiev. Mr Sushko concluded that, overall, Russia hopes that the next Ukrainian government (following the presidential election next January) will be more accommodative and attentive to Moscow’s interests than the present one. It is not, however, a foregone conclusion given the fact that, due to one of the paradoxical twists of the economic crisis, Ukraine’s energy dependency on Russia has somewhat diminished.

In his presentation, Mr George Dura defined Moldova as a smaller, weaker and poorer state than Ukraine and Belarus and the one that still suffers from the consequences of a separatist conflict. Moldova seeks to be in the good graces of both the EU and Russia, at a time when both actors are increasingly uncomfortable with each other’s presence in their shared neighbourhood. Russia’s interests are as much both military and strategic as they are of an economic nature, meaning energy and trade, as well as political. Russia wants to reintegrate Post-Soviet space under Russia’s control, and it is willing to use any means that facilitates its political interference. By contrast, the EU reluctantly extends its influence further east. The EU relies heavily on the element of attraction of its model of development in Moldova, and the country has in recent years turned its attention to European integration. Russia, for its part, relies on a series of soft and hard power levers which are used strategically. Russia has a strong influence on Moldova’s foreign policy because of the conflict in Transnistria. Mr Dura concluded that the EU has to work more within the Eastern Partnership to anchor Moldova firmly into the EU and Russia shouldn’t apply too much pressure, otherwise Moldova will more actively look for other international partners and markets.

In the Q&A session there was a question if in Transnistria the situation might erupt like it did in Georgia in 2008. Mr Dura thinks that it won’t go that far because the Transnistria conflict lacks an ethnic component that lies at the heart of the Georgia – South Ossetia confrontation. Also, Moldova is not interested in joining NATO. Russia sees that by keeping the conflict as such, it can use it as a bargaining chip. Another question was asked about Russia’s Black Sea fleet base in Sevastopol — if it is a strategic must for Russia and if Russia will use force there. Mr Sushko answered that the reason for Russia to retain the base is, above all, political; they need the instrument for pressure. It is unlikely to see a classical war there, but one cannot exclude minor skirmishes around the BSF base provoked by groups of hooligans.

In the second panel “Russia, Central Asia and the Caucasus” Prof. Fatima Kukeeva spoke about the relationship between Kazakhstan and Russia which she described as a strategic and mutually beneficial partnership. At the moment, the relations between the two countries are influenced by the global economic crisis, the situation in Abkhazia and South Ossetia, energy issues, and international terrorism. Russia wants to realize a number of bilateral economic projects and, overall, seeks to establish a closer economic and political relationship with Kazakhstan. Kazakhstan, though, has its own interests as it wants to further develop relations with NATO, the EU and the US. Prof. Kukeeva concluded that Russia is a resurgent state and is likely to continue its assertive foreign policy in the Eurasian neighbourhood. Russia’s interests are to keep Kazakhstan as its closest partner, to increase the level of integration with Kazakhstan, including closer coordination in energy and transportation policies.

Dr Domitilla Sagramoso described the region of South and North Caucasus as a very complex area which is multiethnic, highly volatile, and having many difficulties with Russia. Throughout the 1990s, the situation in the Caucasus has largely been extremely unstable, with Russia trying to resolve the numerous conflicts there. In recent years, Russia has again actively tried to get involved in the region, especially in Georgia’s separatist region of Abkhazia. In 2000, the whole security situation in the Caucasus has changed; Ingushetia and other North Caucasus republics have become the source of lots of security challenges for Russia. At the moment, Russia wants to actively engage in the region, and its military presence in the area, particularly following the 2008 Georgia war, is very strong. Dr Sagramoso concluded that the situation in the area is much more complex than it seems. She also challenged the view that Russia is now trying to recreate the Soviet Union. In fact, she argued, Russia wants to make sure that its interests are secured in the unstable and combustible region.

In his presentation, Dr Igor Torbakov noted that the situation in Central Eurasia is particularly illustrative of strategic uncertainty. While seeking to answer the question ‘What does Russia want?’ one has to understand the complexity of Russia’s interaction with post-Soviet lands which present an intertwined maze of security, economic and political issues. Among Moscow’s key interests in the region are restoring Russia’s dominant position in post-Soviet Eurasia; preventing outside actors from establishing positions there; managing centrifugal forces — slowing the drift of the post-Soviet lands away from Russia; managing regional conflicts (& addressing terrorism); and dominating the development, transit and export of energy resources. Yet here’s the paradox, Dr Torbakov concluded: Russia is consistently demonstrating a sorry failure to transform its significant potential advantages into coherent policy aiming at establishing good relations with its Eurasian neighbors. Two interrelated factors contribute to this: Russia’s policymaking flaws and geopolitical competition from China, the U.S. and the EU.

In the Q&A session a question was posed if a new war between Abkhazia and Georgia is likely. Dr Sagramoso responded that she doesn’t think Abkhazia has an interest to be involved in an armed conflict with Georgia. There might be various provocations but no interest to start a war. There was also a question about the Georgia war — if the West should have read the signals better and reacted before the war started. Dr Sagramoso answered that a lot could have been done, and there was clearly a lack of understanding of the existing risks involved. 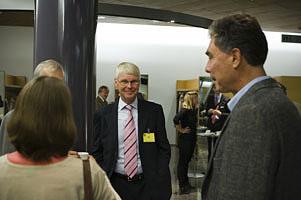 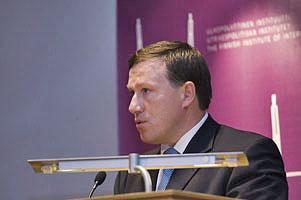 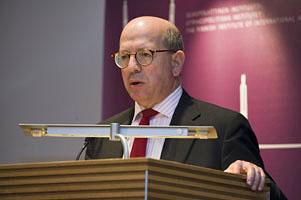 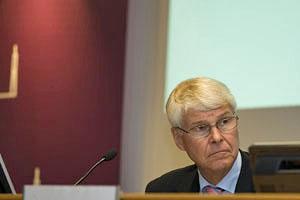 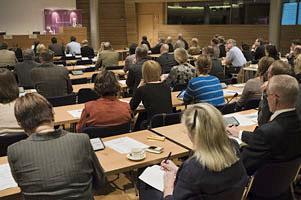 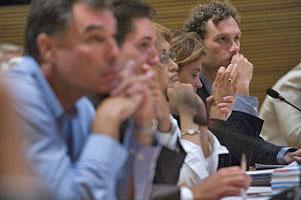 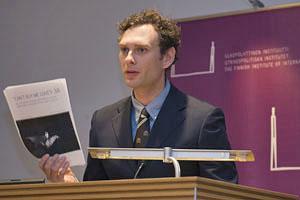 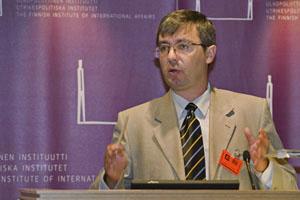 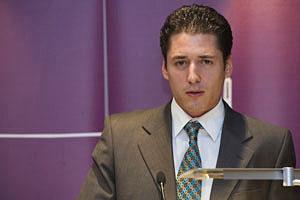 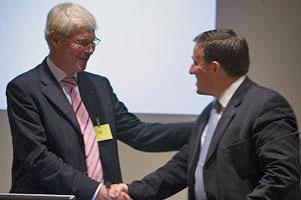 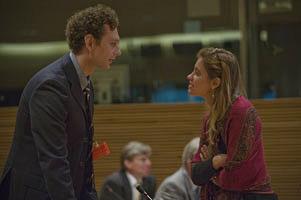 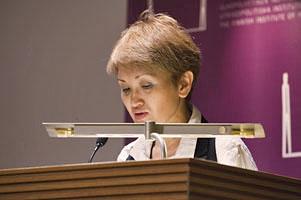 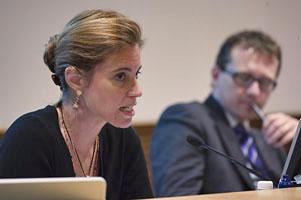 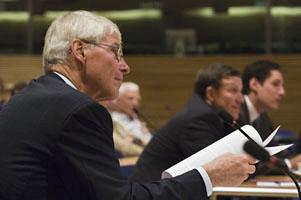 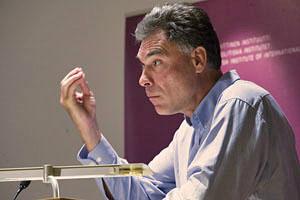 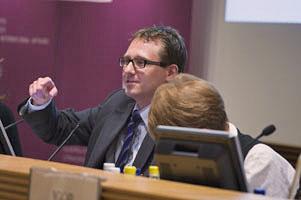