Selected challenges of the strategic partnership between Europe and the USA will be addressed in this seminar with a focus on Afghanistan and future issues for NATO, including the development of the NATO/ESDP relationship.

The areas of expertise of Professor Mattox include national security policy, German foreign and security issues, transatlantic relations and international relations. She has been a Member of the Policy Planning Staff for Secretary of State Warren Christopher, Bosch Fellow in Germany, NATO Research Fellow and is currently the Distinguished Fulbright-Dow Research Chair at the Roosevelt Center in the Netherlands.

Mr. Valtteri Vuorisalo is a researcher at the Institute for Foreign Affairs. His main research interest is how the Revolution of Military Affairs impacts states’ policies and international relations. Previously, Vuorisalo has worked as a consultant for the Finnish Defence Forces and has participated in two peace-keeping missions in Bosnia. Furthermore, Vuorisalo is a Member of Board (2009) in the Information Society Group of the Finnish Parliament.

Professor Gale A. Mattox began by outlining the four most important transatlantic security issues of the day: 1) Afghanistan 2) coordination between the US and Europe 3) relationship with Russia, and 4) President Barack Obama’s vision of a world free from nuclear weapons.

The current challenges constitute a different set of issues from those of the Cold War era. Obama understands the need for cooperation between the US and Europe to tackle them. In Professor Mattox’s view, he is the first US president to accept globalisation as a way of life and international organisations as a part of it. Furthermore, he believes in opening negotiations with enemies. Of course, his work is also shaped by the heritage from the previous administration. In this regard, Mattox was confident of Obama’s ability to make a real change.

Mattox continued by looking at Afghanistan, which she defined as the most critical foreign policy issue for the Obama administration. Previous administrations have not fully understood Afghanistan, whereas Obama has taken it more seriously, and made conceptual changes to the US policy. These are, firstly, a territorial change, i.e. understanding that the whole region is important. Secondly, he has begun to strengthen civilian involvement and involvement in general. This refers to the growing number of troops and trainers, but especially to the enhanced role given to civilians and development work. Thirdly, Obama has changed the US leadership, with the new one concentrating on the reduction of civilian casualties. Mattox felt that the highly visible change had also been “psychologically beneficial”. Furthermore, the appointment of Richard Holbrooke as special envoy to the region highlights the importance of Afghanistan and the new approach. While not yet an accepted policy, Mattox saw focus on troop functionality as an emerging trend. This would eradicate some of the inconsistencies caused by troops being too strictly divided according to their home countries. Fourthly, Mattox brought up the change in the US approach towards the insurgents. While not being directly involved itself, the US administration is supportive of dialogue taking place behind the scenes with those who are deemed as most likely to split from the insurgency.

The US continues to face difficulties with its policy towards Afghanistan. There are several challenges on the home front: ensuring sufficient funding in time of financial crisis is difficult in itself, and the 2010 mid-term elections, as well as other priorities such as health care only add to the challenge. If success is not achieved in the short term, falling support by citizens could also become a major hindrance. In Afghanistan, stability of government structures is a major challenge, as are poppies, on which many poor Afghans depend on to survive financially. Finally, the US needs to flesh out its exit strategy.

As to the relations between NATO and the European Security and Defence Policy (ESDP), Mattox began by outlining that the US has traditionally had an ambivalent position towards Europe’s security role. While it has supported the idea of Europe gaining a bigger say in security policy issues, it has at times tried to ensure this happens within the confines of NATO. In the course of fighting in Iraq and Afghanistan, as well as thanks to the Obama administration, the US attitude towards the ESDP has become more constructive.

The Clinton administration generally viewed European defence aspirations as NATO-friendly whereas for the Bush administration, and especially for defence minister Rumsfeld, they were a source of greater friction. The current Obama administration is taking a supportive stance because of practical successes achieved by the EU. There is an emerging trend among NATO accepting an active role of the ESDP and seeing the benefits of having this partner organisation. Also the fact that members of Clinton administration are being hired back by Obama is contributing to the benevolent attitude.

With regard to Russia, Obama clearly wants to reset the relations. However, two questions remain unanswered: whether the Russians want that and how Obama plans to do the reset. European countries have very different relations towards Russia. Obama’s tactic seems to be one of small steps. This was seen e.g. in Obama’s announcement that he first wants to see whether the ballistic missiles to be located in Eastern Europe work, which contributed towards lessening tension over the issue. Also, whilst being hesitant towards the Russian proposal for a new security conference, he has not cut off the negotiations altogether.

Finally, Mattox took up briefly some topical issues related to nuclear weapons, firstly, the upcoming need to negotiate continuation to the START I, and secondly, Obama’s references in his speech in Cairo to the NPT and Iran’s right to civilian nuclear power.

Researcher Valtteri Vuorisalo concentrated on the institutional challenges of the cooperation between the allies. In the end, success depends on the ability to collaborate on the ground, he stressed. Vuorisalo sees the work of the allies as functionally suboptimal, though he understands that there are political reasons for these organisational problems. Europeans have a desire to acquire military capability of their own, but do they have a real motive for that? The ability to become more agile, as well as the ability to adjust plans in the course of action and take advantage of networks, including local ones, is crucial for a successful operation.

In the Q&A session, several speakers took up the fact that Afghans had no capability of producing themselves the kind of sophisticated weapons or acquiring military skills seen in Afghanistan. These are clearly coming in from elsewhere. Speakers suggested that this should be the target of US actions, not the Afghans.

Other topics touched upon by the participants included whether NATO would finally get a new strategic concept and whether it envisages a more global role to itself. On US pressure towards its allies to shoulder a bigger share of the burden in Afghanistan, Mattox pointed out that it has often been expressed behind closed doors some months after a summit, not publicly during it. Public pressure is likely to be more subdued also because the German elites are leaving the discussion on Germany’s future role in Afghanistan until after the elections and hence also any changes to the current role. Finally, the plausibility of the global zero campaign, as well as the possibility that the START I will not be continued, were commented on.

We warmly thank the Fulbright Center for its contribution to the funding of this event. 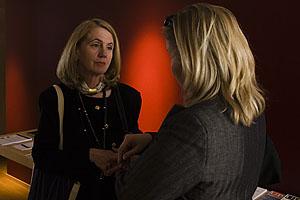 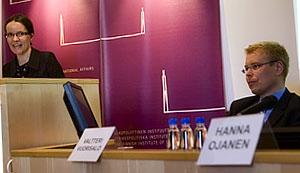 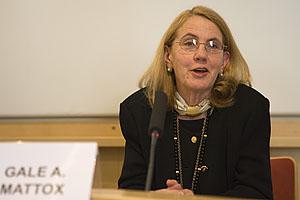 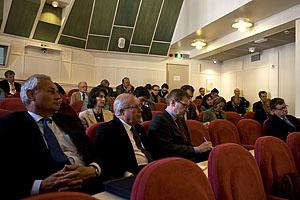