The ”Islamic State” organisation (IS) has brutally taken over vast areas in Syria and Iraq and controls them though violence and terror. The Iraqi army has retreated, and Kurds are struggling alone on the ground to stop the organisation from advancing. At the same time, thousands of volunteers travel to join the organisation from all around the world, including Finland, because of the skillful use of propaganda in the social media. The IS needs to be confronted both on the ground in Syria/Iraq and in the countries where a number of citizens are contributing to the spread of the organisation. An anti-IS coalition which includes Western and regional powers has launched a military operation in order to fight against the development of the organisation, and many countries, including Germany, are delivering arms to the Kurds. The United Nations has urged new laws and measures to control the flows of volunteer fighters. The following questions will be discussed: Are the countermeasures enough? Is there something else to be done to defeat the IS? How can the flow of foreign fighters be stopped?

Teija Tiilikainen opened the seminar, the aim of which was to study the phenomenon of the Islamic State (later on IS or ISIS, depending on the abbreviation used by the speaker) from two perspectives: first, the IS in its political and regional context and second, the domestic front of the fight against the IS. She said the IS has to be confronted on both, the ground and on the domestic front, where it is important to assess who the foreign fighters are and what can states and the EU do to prevent these people from joining the ranks of the IS.

Peter Neumann gave an insight into the phenomenon of foreign fighters. Their active use of social media on the front lines of the conflict in Syria has permitted the International Centre for the Study of Radicalisation and Political Violence (ICSR) to engage in conversations with foreign fighters. These contacts have enabled research and profiling of the, approximately 15 000, people who have come from foreign countries to Syria to join the conflict. According to Neumann, the most important trend of the phenomenon is that the numbers have stagnated during times when the narrative has been about fighting between Sunni rebel groups. Whereas this deterred people from leaving, there was a surge in the numbers after the declaration of the Islamic State. Neumann pointed out that the vast majority of the foreign fighters are from Middle Eastern countries and the worst-affected countries in Europe are Belgium and the Netherlands, followed by Norway, Denmark and Sweden. Due to the scale of the phenomenon, he thinks it quite certain that this generation of individuals will cause insecurity still in 10-15 years. Motivations for foreign fighters range from personal needs to political, religious and moral convictions. Neumann argued that the creation of the Islamic State appeals as a motivation to a more ideologically hardened audience and that since the interventions there is also a re-emergence of the narrative of the West as an enemy of Islam. According to Neumann enabling factors for leaving include Syria’s geographical proximity and the fact that it is easy to get into the country. The internet and social media are important in motivating foreign fighters but Neumann insisted that it is not essential to target the official accounts of ISIS and other groups, because the most influential are individual foreign fighters, not necessarily officially affiliated with the ISIS. He also noted that a significant majority of westerners join the most extremist groups, especially the Jabhat al Nusra and the IS. Most of the Europeans going there do not speak Arabic or have battle field experience but are the most ideologically motivated ones and as such vital to the ISIS. Those individuals lacking other special skills are used for excessively brutal operations that locals refuse to be involved in. Neumann highlighted that according to estimates a large majority of suicide bombings and beheadings are carried out by foreigners. This would suggest that the return of the foreign fighters will represent a substantial threat of terrorism and other problems. Neumann underlined the importance of assessing all the returnees and the need to distinguish between the disturbed, the dangerous and the disillusioned who wish to reintegrate into the society. He reminded that their reintegration is important for the disintegration of ISIS and also more cost-effective in the long-term than imprisoning them.

Wolfgang Mühlberger offered an analysis of why and how ISIS emerged and was able to gain this momentum. He described the movement as utopian and messianic in its longing for a pure identity exclusive of other groups and its visceral

hatred. ISIS originated in Iraq and its logic of fighting the near enemy has been transported to Syria, where the fight is against Bashar al-Assad’s government and other non-Islamist militant groups. Mühlberger pointed out that although on the
ideological side the movement seems megalomaniac, declaring themselves the caliphate, their military strategy seems quite realistic. It is currently focused on consolidation after the initial phase of expansion. The case of Kobane is
therefore, in his opinion, a slightly surprising move as it does not make sense in the bigger strategic picture. It is a Kurd-controlled ”wedge” between ISIS-controlled border posts, so it makes sense to integrate it into the ISIS-controlled
territories. Also, the fight over Kobane has now become symbolic to the point that ISIS cannot be seen giving up. In general, Mühlberger noted, ISIS goes for weaker targets and territorial vacuums. They have been able to grow as a
movement taking advantage of the fears and uncertainties in the region and the failure of the Arab Spring in the development of democracy, combined with Sunni resentment against Shia or Alawite dominance. The challenge of ISIS is now to
control these territories and not to lose the local population’s allegiance. Mühlberger ended his speech with some thoughts on what should be the main elements of the fight against ISIS. In his view, sequencing is important in terms of
feasibility and therefore Iraq should be addressed before Syria. In order to defeat ISIS, it is essential to convince the local populations, namely the Sunni tribes, to fight alongside the Baghdad government. In the international context,
Mühlberger sees it important to get Turkey and Saudi Arabia to change their ambivalent position in the fight against ISIS, and in the case of Syria, to keep the political process alive to avoid reinforcing al-Assad’s early narrative of fighting

Mari Neuvonen gave an overview on the EU’s comprehensive approach on the IS. She said preventing the IS advancement is a top priority for the EU and the goal is to end the violence and to find a political solution to the Syrian conflict. She noted that the IS offers an opportunity for the EU to further develop its comprehensive approach consisting of different policies and instruments. The situation also tests the old division of EU competencies between the Council and the Commission. The EU has developed a foreign fighters strategy, the main focus being on counter-terrorism.

Teemu Sinkkonen focused on the domestic front of the fight against ISIS. He said the phenomenon of foreign fighters has been effectively securitised in the Western world and the threshold for making new laws is relatively low compared to other times. This reaction has been encouraged by a UN Security Council resolution on foreign fighters urging states to prevent foreign fighters travelling to Syria. Sinkkonen gave some examples of this policy- and law-making trend in Europe, ranging from Denmark’s more soft means with a focus on reintegration and de-radicalisation of returnees to harder methods such as taking away passports from potential foreign fighters in Germany and the use of preventive arrests and stripping returnees of dual-nationalities in the UK. All these measures are currently being discussed in Finland as well. As this process advances, Sinkkonen wanted to bring up the question of cohesion in the policies, reminding that the Syrian conflict is a different context from the foreign fighters phenomenon in the Western world. He reminded that internal security policies affect foreign policies as well as the individuals thinking of joining the conflict. He brought up the question of the rule of law with regards to the measures used to prevent individuals from leaving. Arresting or taking passports away from people planning to leave is problematic, as only few commit crimes before leaving. He also warned of populist temptations to find simple solutions with quick effects to complex problems.

Toni Alaranta spoke on the role of Turkey and the Kurds in the Syrian conflict. Since the beginning of the war Turkey has insisted getting rid of al-Assad regime and to that end offered assistance to the opposition groups. The IS has been able to penetrate Turkey and recruit from among the urban poor. Alaranta argued that for Turkey, ISIS is not an ultimate threat but in a way it has been perceived as an opportunity to get rid of the post-World War I state system in the Middle East. Turkey conceptualises the current turmoil in the Middle East as the matrix of a new, Turkey-centred regional order. Alaranta reminded that the Kurds have their own agenda. Kurds in Kobane are fighting for their lives but in the long term, they want to establish an autonomous area in the northern parts of Syria. In spite of some internal struggle among the Kurds, it is clear that the situation is perceived as an opportunity to build an independent Kurdistan finally. Alaranta also reminded that in the fight against the IS, Turkey has very different interests from the US and the other Western states, and this plays in the favour of the IS. These diverging goals should be kept in mind when thinking of ways to fight the ISIS.

Charly Salonius-Pasternak brought the US angle to the discussion. He began by talking about the symbolic value of Kobane for both ISIS and the US. Even if the US cannot control whether Kobane falls, if it would fall, it will be used against it. It is also fundamental to the US that Baghdad not be allowed to fall. Salonius-Pasternak emphasised that the US was a necessary but not sufficient component in the fight against the IS, and President Obama would never have undertaken this operation in Syria or Iraq alone and therefore a big coalition was needed.

The floor was the opened for comments and questions, and several issues related to the IS and the foreign fighters were discussed. With regards to preventing individuals from leaving to join the IS ranks, Neumann considered it important to pass on the reality from the battle grounds to oppose the ISIS propaganda. He pointed out that the reality is that the majority of foreign fighters dying in the conflict have been killed by other Sunni groups. He also finds it important that communities give more support to parents to discuss these issues with their children. Also mosques are not up to date in the eyes of the youth and they need to engage their youth more to prevent radicalisation. 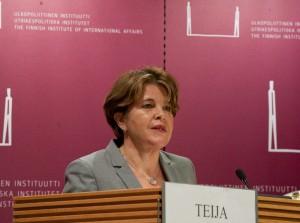 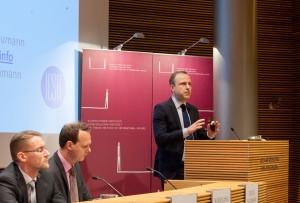 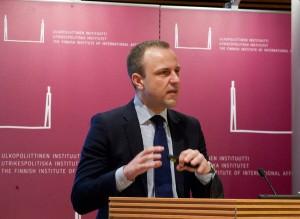 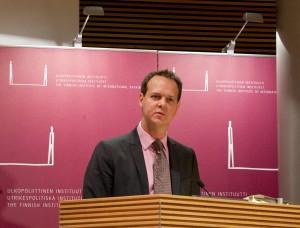 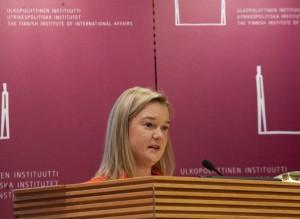 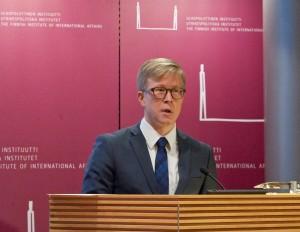 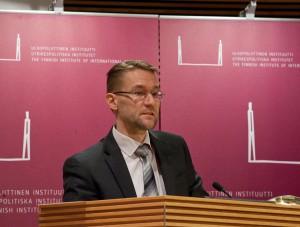 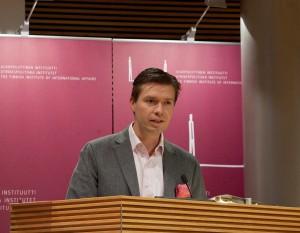 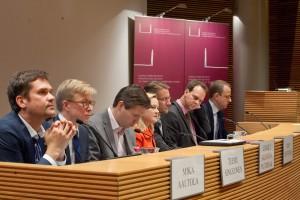