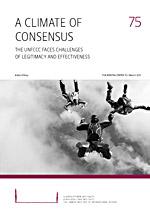 The Cancún climate meeting adopted a package of decisions to numerous standing ovations. However, it did so against loud and formal protests from Bolivia, stretching the concept of ”consensus” more than ever before within the UN climate regime.

The Cancún meeting also brought to everyone’s attention the inconvenient truth that decisionmaking in the UNFCCC exists in a legal vacuum. The Conference of the Parties has never agreed its Rules of Procedure, and has during its 17-year history operated with draft Rules of Procedure without voting rules, under a general agreement that decisions are taken by ”consensus”.

In the light of the dramatic events in the recent Copenhagen and Cancún meetings, as well as the daunting prospects of achieving a ratifiable legal instrument for post-2012, it is clear that the relationship between consent and authority has become too flimsy to provide an unproblematic basis of legitimacy for the UNFCCC’s decision-making.

The 2000s led to the erosion of UNFCCC’s legitimacy as a decision-making arena, especially in the subjective views of Northern governments as well as considerable parts of the expert community and the public in general. This trend led to an outburst of UN scepticism after the Copenhagen meeting, declaring the UN climate regime to be a ”multilateral zombie”.

While the Cancún meeting has been criticised with arguments based on process and legitimacy, from a broader perspective it seems likely that achieving decisions with some substance is actually the primary need in securing the legitimacy of the UN process.

Had the Cancún agreement been negotiated outside the UN, it would very likely have been weaker on several fronts. Also, it is important to keep the longer term option for a legally binding treaty open; the only institutional possibility for this lies within the UNFCCC.