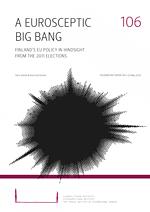 The Finnish parliamentary elections in spring 2011 were marked by a landslide victory for the Eurosceptic (True) Finns Party. Such an unprecedented upswing for anti-integrationist voices was expected to reshape Finland’s EU policy.
The Finns Party did not join the government, however, and the party has mainly influenced Finnish EU policymaking while in opposition, and indirectly through public opinion-building.
While outright anti-integrationist rhetoric remains on the margins of national public debate, more critical approaches to EU politics have become increasingly pronounced. Political parties have, to varying degrees, adapted their rhetoric and policies to the changing environment.
Importantly, the broad consensus on EU affairs in Finland has broken down, at least temporarily. The EU has featured high on the agendas of the recent election campaigns as well as in opposition politics.
This has affected Finland’s official position too. It has moved in a more cautious and self-contained direction, although the country remains a pro-integrationist member state.
Kategorier:
Europeiska unionen Finlands utrikespolitik sv FIIA Briefing Paper