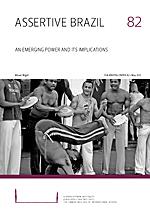 Brazil is in the process of asserting itself on the international stage, as reflected in a bolder and more activist foreign policy, characterized by a greater willingness to challenge the status quo, curb US hegemony in South America and press for the reform of global governance institutions.

Brazil has sought to form a regional power bloc in South America under its leadership, but faces resistance from some of its neighbours. If the country is to succeed, it will have to bear a larger share of the costs of regional integration and become more willing to accept regional institutions that restrict its autonomy.

Forging ”south-south” alliances with the BRICs and the broader developing world has helped Brazil gain international clout irrespective of whether South American integration proceeds or not.

Relations with the US are tense, but set for improvement under new president Dilma Rousseff. The US has much to gain from a closer relationship, but will have to engage with Brazil on more equal terms.

The EU has rushed to establish a Strategic Partnership with Brazil, but for both parties its value is questionable. Instead, when it comes to the EU’s Latin America strategy, reviving inter-regional cooperation should be a priority.

Ultimately, given that Brazil’s main foreign policy goal is its bid for a permanent seat on a reformed UN Security Council, both the EU and the US possess a valuable bargaining chip that can be used to encourage Brazil to take on a responsible role in global affairs.

The Great Regression? Financial Crisis in an Age of Global Interdependence