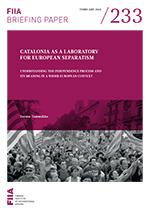 Despite heavy domestic and international campaigning, the separatists have not managed to increase their support, but polarization and instability in Catalonia. Catalonian separatists are at a crossroads: whether to continue flogging the dead horse of the unilateral independence process, or to calm down in order to regain control over autonomous powers. Spain must answer politically to the underlying issues of constitutional crisis and post-economic crisis discontent. Mere “lawfare” against separatism is not enough to justify the current system.

The EU has no other option but to observe events from the outside, while the Spanish government refrains from requesting an intervention in the meantime. This may diminish pro-EU sentiments amongst all of the separatist regions in Europe, and force them to search other allies. The international community is highly reluctant to recognize new states, especially cases like Catalonia, where people can already enjoy full civil and human rights, the rule of law, and affluence.

The Catalonian independence project: The frustration of the near-majority

The subtle Spanish revolution: New parties change the game, but does Catalonia still want to play?