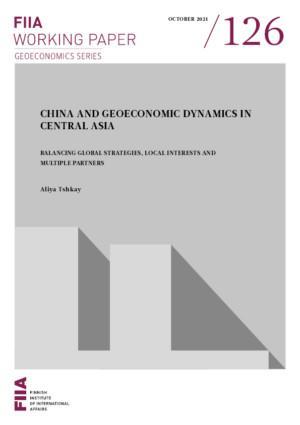 Central Asia is at the core of China’s ambitious Belt and Road Initiative (BRI), which promises to bring connectivity, trade, and improved infrastructure, as well as overall economic development to the states of the region. Yet beyond the official rhetoric, China is promoting its power through geoeconomic means. This paper looks at areas of cooperation (energy, infrastructure, trade, and finance) and identifies the ways in which China is involved with the region.

Through a combination of loans, investments, and infrastructure projects, the research shows how China ‘binds’ the region closer to itself and ‘wedges’ out alternative partners. It also shows how Central Asian states utilise the funding within the BRI framework for national development programmes, whilst navigating avenues for mitigating the establishment of a dependent relationship with China. The paper concludes with some policy implications for China, Central Asia, and the wider region.