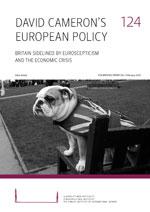 Deeply rooted Euroscepticism within some quarters of the British Conservative Party was initially thought to be balanced by the formation of a coalition government with the pro-European Liberal Democrats.

These wishes soon proved to be premature and the British government led by the Conservatives has emerged as a very difficult partner in many fields of EU policy.

Prime Minister David Cameron’s weakened support, the European economic crisis and EMU reforms have geared the British European policy towards an increasing awkwardness vis-à-vis its key European partners and prompted a debate on the re-negotiation of Britain’s relationship with the EU.

Relatedly, Britain’s position in the EU has weakened significantly.

Mr Cameron’s recent speech attempts to re-establish some degree of British authority in the EU, and in the event that he fails, to further distance Britain from the EU.

It is uncertain whether the current trend will prevail after the next British general election, slated to be held in May 2015 at the latest.