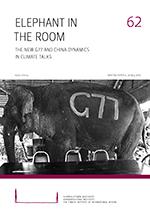 The G77 and China is a product of the North/South divide and the political economy of the late 20th century. It is broadly based on a ”self-definition of exclusion” from world affairs.

The new BASIC block of China, India, Brazil and South-Africa represents the emerging economies that face Northern pressure to ”internationalize” their climate actions. China has been able to steer the big four close to its climate position, for example in the debates over the legal form of post-2012 agreement.

The obstructionism of radical Southern countries such as Bolivia and Venezuela enjoys a degree of legitimacy among some small developing countries, who share the experience of an ”unjust world order” and marginalization in multilateral negotiations, as well as among OPEC countries and China, who have tactically considered it as in their interest to delay reaching a more binding climate agreement under the Convention track.

In spite of the growing division in climate positions, there is a logic of mutual dependency at work. China, although an emerging superpower, is dependent on the G77—without the support and membership of the coalition it would find itself increasingly ”against” the rest of the world as the largest absolute GHG emitter. In the context of the G77’s formation and discourse of exclusion, it is also clear that what China brings to the table—unprecidented economic and political power—is valued by most G77 members.

The North/South compromise vaguely set forth in the Copenhagen Accord in terms of financing and transparency of developing country actions is a fragile one. Parties such as the EU should do their best, economically and politically, to build on and operationalize that compromise.