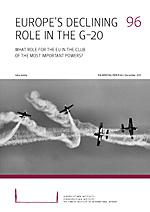 Europe and the EU have played an influential role in the development and decision-making of the Group of Twenty (G-20). Europe’s influence in shaping the developments in the group and, more broadly, in global governance is, however, declining.

The G-20 Summit in Cannes provided Europe with an opportunity to re-assert its leadership. Its aspirations were, however, overshadowed by internal divisions heightened by the deepening European sovereign debt crisis.

Even prior to the current crisis, the increasing global competition and decrease in standing turned EU members inward-looking. Instead of a further Europeanization of foreign policy and external relations, many have observed a tendency to re-nationalize European policy-making.

This tendency will make it increasingly difficult for Europe to secure its standing and adapt to the ongoing transition of the world’s economic and political power. Europe should reinvigorate its commitment to a joint external action as a matter of priority.

The key question for Europe is whether it will manage to Europeanize the G-20 and gear it towards the multilateral principles which lie at the heart of European integration; or whether we will see the opposite process, namely a ‘G-ization’ of the EU in the sense of major (European) powers dominating increasingly informal European and global decision-making.

It is in Europe’s interests to further institutionalize the G-20 and tie it to the formal multilateral architecture of the world economy and politics.