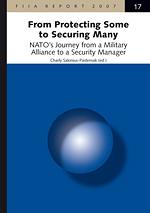 The North Atlantic Treaty Organization (NATO) has changed dramatically since the end of the Cold War. While keeping its collective defence commitments, NATO has taken on new roles and tasks, enlarged its membership and created a network of partner states, all with the aim of increasing the security of member and partner states. NATO has thus remained relevant and useful to its increasingly diverse membership. The organization will continue to change, becoming what its members collectively make of it.

Finland’s relationship with NATO will also continue to change, whether or not it ever joins the Alliance. Finland must independently evaluate and make its defence and security policy related decisions. However, these debates and subsequent decisions cannot be engaged in as long as a key part of the European and transatlantic defence framework – NATO – is not understood.