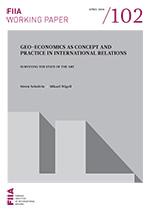 Recent cases of power politics such as China’s One Belt, One Road strategy, Venezuela’s petro-diplomacy during the era of Hugo Chávez and Western sanctions against Iran and Russia indicate that economic means have become critical to how states exert power. Military means, meanwhile, appear to matter less. This shift in power politics is captured by the term ‘geo-economics’, which we understand as an analytical approach and, at the same time, a foreign policy practice.

This Working Paper traces the rise of geo-economics since the end of the Cold War. It surveys the state of the art, distinguishing between approaches that stand in the tradition of Edward Luttwak’s work and conceptualisations of geo-economics that go in very different directions. This way, key fault lines that mark research on geo-economics are revealed. We also develop our own definition of geo-economics and show how a geo-economic perspective complements major IR theories

Geopolitics: An Overview of Concepts and Empirical Examples from International Relations

China’s Advance in Latin America: Geostrategic Implications for Europe, the US, and the Region Itself