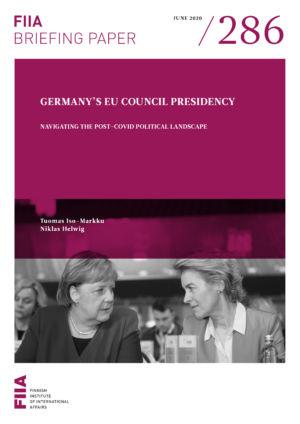 In view of the pervasiveness of the Covid-19 crisis, Germany has rightly announced that its presidency of the Council of the EU in the second half of 2020 will be a ‘Corona presidency’. However, it will also have to address other immediate issues as well as further longer-term priorities of the EU.

The initial phase of the pandemic was characterised by largely uncoordinated member state action. The issues and instruments now on the table, particularly concerning economic recovery, are closer to the core of the EU’s authority, underlining the importance of a successful presidency.

Somewhat surprisingly, the Covid crisis has moulded European politics in a way that may facilitate the work of the German presidency. The positions of the member states appear less fixed, whereas the German government itself has more domestic leeway than before the crisis.

The political situation in the EU and in Germany remains highly volatile and the presidency’s success depends on factors that are partly out of Berlin’s control: the development of the pandemic, the depth of the economic slump and the public perception of the EU’s and Germany’s crisis management measures.