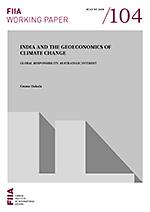 As climate change progresses, it will have impacts on global politics, creating both new vulnerabilities and opportunities. Geoeconomics provides a useful analytical framework for the political implications of climate change as it shifts the focus from military force to economic means of exerting power.

This working paper looks at the geoeconomics of climate change in the case of India. It examines the ways in which India has used climate policies to gain leverage and contain threats regionally and globally. Due to its emerging power status and high vulnerability to climate impacts, India holds a key position in the global fight against climate change.

The paper argues that India has incorporated geostrategic uses of climate change into a wider shift in its foreign policy. Globally, it has chosen a cooperative strategy to emphasise its responsibility through diplomacy and sustainable energy investments, contributing to its role as a global power and to its influence in partner countries. Yet a similar geoeconomic climate policy has not been applied in its regional relations. The Indian case shows how climate change can lead to both competitive and cooperative geostrategies.