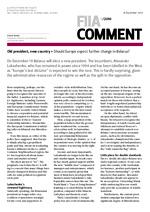 On December 19 Belarus will elect a new president. The incumbent, Alexander Lukashenko, who has remained in power since 1994 and has been labelled in the West as “Europe’s last dictator” is expected to win the race. This is hardly surprising, given the administrative resources of the regime as well as the split in the opposition.