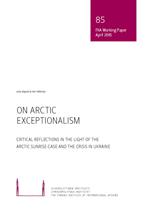 During the last decade, the Arctic has generally come to be understood as an exceptional ‘zone of peace’ and a ‘territory of dialogue’. In this sense, the Arctic has been seen as a unique region detached, and encapsulated, from global political dynamics, and thus characterized primarily as an apolitical space of regional governance, functional co-operation, and peaceful co-existence.

This paper discusses and critically analyzes this notion of ‘Arctic exceptionalism’. In particular, the paper argues that the contemporary Arctic is not only global but – precisely because it is global – no different from any other region in terms of being increasingly subject to politico-strategic (or other kinds of) dynamics.

The paper begins by discussing the recent history of Arctic exceptionalism, after which it discusses in more detail why the Arctic is often considered to be an exceptional zone of peace and co-operation. While these arguments have validity in avoiding/defusing intra-Arctic conflict dynamics, the paper argues that the regionalist approach brackets out global political dynamics and their impacts on the Arctic region, thus neglecting the potential for extra-Arctic conflict dynamics as well.

By focusing on two cases – the Arctic Sunrise case and the ongoing crisis in Ukraine – the paper illustrates how forces and dynamics external to the region have had an impact on the co-operative spirit and governance practices of the Arctic. The Arctic Sunrise case, in which the Russian coast guard seized a ship carrying Greenpeace activists near the Prirazlomnoye oil rig, revealed the actual limitations and handicaps of the UNCLOS as a reliable governance framework – and particularly as a legitimate arbitration mechanism in the case of an interstate dispute – also in the Arctic. This is important since the UNCLOS has been regarded as the bedrock of Arctic cooperation.

The second, and even more important, case is the ongoing crisis in Ukraine, which has brought external political and conflict dynamics to the Arctic. This has had direct and indirect effects on Arctic cooperation in at least four ways, by affecting: a) the way the Arctic is discussed and understood, b) existing practices of security co-operation in the Arctic, c) in a limited way, the workings of governance structures and particularly the Arctic Council (there have been active and mostly successful measures to prevent spillover), and d) economic cooperation in the Russian Arctic through the policy of sanctions.

While not necessitating alarmism, the paradigm of Arctic exceptionalism appears to be an insufficient approach to understanding both the present and future of the global Arctic. The contemporary Arctic is not – and should not be viewed as – a closed system that can be separated from exogenous political (or other) dynamics and managed only by relying on governance structures, practices and imperatives related to the region itself. Unshielded from global dynamics, the Arctic has many potential trajectories that may, or may not, be realized due to a number of global uncertainties and challenges. The Arctic is just like any other region in an interconnected world; regional development is both constrained and enabled by global forces and dynamics – be they economic, political or environmental in nature.