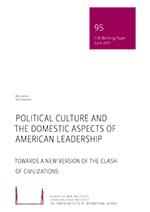 Donald Trump assumed the American presidency in the aftermath of a bitterly fought presidential campaign. Instead of healing the political wounds of the nation in the time-honoured American tradition of pragmatic arbitration, the Trump administration has drawn upon polarizing politico-cultural trends to frame the tenets of its America First policy agenda both domestically and globally. Two such developments in American domestic political culture, the narratives of decline and the revival of religiosity, are particularly relevant when assessing the Trump administration’s leadership mode and its emphasis on securing Western civilization against its enemies.

Tapping into these underlying politico-cultural trends allowed Trump to win an election in an era when the structural demographic trends in America should have favoured the democratic candidate. However, by utilizing them as a mode of legitimation for its rule, the administration risks further confrontation and polarization of the American body politic. Internationally, the result has been a Manichean message of a civilizational battle between good and evil, suspicion of globalist influences and alliances, along with the drive to erect stronger borders. When assessing the Trump phenomenon and its implications for America’s global role, it is therefore essential to acknowledge that the sense of American decline, the revival of nativism and religion in US politics, and the country’s changing demographics are intimately intertwined with broader debates over America’s national and, by implication, foreign policy identity.

The Future of US-Europe Relations: Institutional constraints and public opinion may render changes smaller than expected