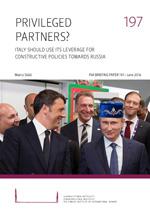 Italy has a long-standing cooperative relationship with Russia, which is based on significant economic contacts and the lack of major contentious issues in bilateral relations. The Italian energy company ENI, partially state-owned, has developed a strong relationship with Gazprom.

Italy perceives itself as a ‘middle power’ that can achieve its foreign policy objectives through cooperation with the international organisations of which it is a member, primarily the EU and NATO. However, Italian policy-makers tend to believe that a stable European security architecture can be achieved only with Russia’s participation. Hence, Italy has been a staunch supporter of dialogue with Russia in the EU and NATO.

The Ukraine crisis exposed the limits of cooperation between Moscow and Rome: the EU sanctions and Russian countersanctions severely affected bilateral trade, while the energy partnership was weakened by the cancellation of the South Stream pipeline project.

Domestic pressure to lift the sanctions is increasing in Italy, particularly from the agricultural and manufacturing sector, which have been the most affected. However, the Italian government is unlikely to oppose the extension of EU sanctions without progress in the implementation of the Minsk-2 agreement.

Italy could contribute to EU-Russia relations by profiling itself as a proactive, leading EU interlocutor on the resolution of the Libyan crisis, anti-terrorism efforts in North Africa and Mediterranean politics in general.