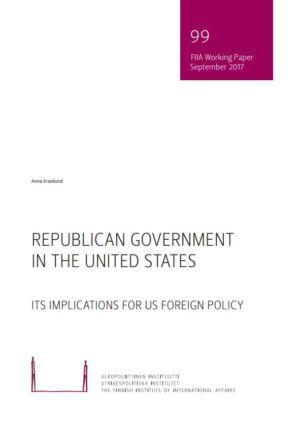 The 2016 elections in the United States resulted in Republican victories at both state and federal levels. After the years of divided government during the Obama presidency, the current government in the United States presents an excellent opportunity for the Republicans to advance their policies and agenda(s). The majority party status could be more beneficial in domestic politics than in foreign policy, where the president’s leeway to act is already wider. A Republican-dominated government does not mean, however, that there will be no dissension over adopted policy positions and lines – a situation which has already become apparent during the first months of President Trump’s government. In a situation where there are no wins in domestic politics, the political capital could be turned towards foreign policy. The fact that the president’s party holds a majority in Congress may diminish congressional opposition in terms of not passing bills that curb or limit the president’s powers in foreign policy matters that concern funding, to mention just one example.

The extent to which the Republicans will be on the same page in different policy issues will be a relevant question for the future, particularly when taking into account the looming 2018 mid-term elections, which exert a particular pressure of their own. Where, when and by whom will the political capital be used? How will different factions within the party work together? And where will the power reside? It has already been discussed whether Trump has moved closer to the Republican ”mainstream” in his policies, not necessarily because of party pressure, but because of the political circumstances. The other tendency it that the Republican’s will further drift apart in the White House and Congress.