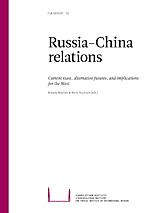 RUSSIA HAS A HARD TIME ADJUSTING TO THE RISE OF CHINA

World history illustrates that the rise of new powers has always generated tension and challenges of adjustment within the existing power structure. In the case of the Sino-Russian bilateral relationship, these challenges are further complicated by Moscow’s own struggle to adjust itself to the fact that Russia’s international hierarchy of prestige and influence collapsed along with the fall of the socialist world order it created and was leading. Concurrently, Moscow is increasingly seen today as becoming China’s ”little brother”.

The Sino-Russian relationship is evolving towards a situation that will give Beijing much greater leverage and manoeuvrability over Moscow than ever before in history. This development trend is already evident in the critical bilateral political, security, energy, economic and business arenas, in most of which Russia is more dependent on China than the other way around.