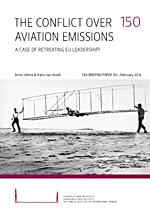 Notwithstanding the incremental steps taken in October 2013, meaningful action on regulating international aviation emissions through the International Civil Aviation Organisation (ICAO) remains a distant prospect. The European Union (EU) must decide on its aviation Directive without the guarantee of a global market-based mechanism being agreed in 2016.

The strong and uncompromising positions of countries opposed to the inclusion of foreign airlines in the EU’s emissions trading system (ETS) are more related to a realist game of politics rather than to the design details of the policy instrument.

The political and legal arguments against the European Commission’s proposal to amend the EU ETS vis-à-vis aviation emissions are unconvincing.

Europe should also insist on its own sovereign rights – such as the right to regulate international aviation in its own airspace – and consider ways of manifesting more assertiveness in the future in order not to create a precedent with the retreat in the Aviation Directive case.

Otherwise, the EU may become vulnerable to pressure in other areas of regulation with extraterritorial implications, and the EU’s credibility when faced with strong and coordinated external influences might be undermined.