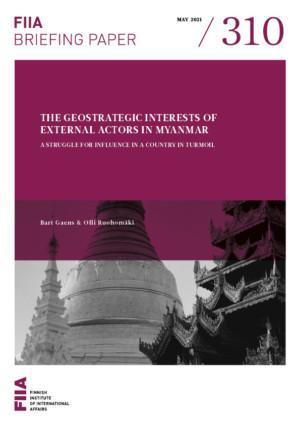 Countries with geostrategic stakes in Myanmar have reacted in different ways to the military coup of 1 February 2021 and its aftermath, which have resulted in over 750 casualties thus far.

China benefits from stability in Myanmar but, given its vast geoeconomic and geopolitical interests as Myanmar is a vital part of the BRI, will not criticize the military. Thailand, itself a military-dominated pseudo-democracy, is certainly reluctant to exert pressure. India focuses on its own national interest and prioritizes the partnership with its strategically important neighbour.

Japan applies quiet diplomacy and aims to function as mediator, while at the same time protecting its business interests. The EU and US have sanctions in place, but history shows these do not have much effect on the junta. Russia’s presence is not significant, but Moscow uses arms sales to establish a foothold in the Indo-Pacific.

ASEAN aims to mediate with Indonesia in the lead, and even achieved a broad consensus on the situation in Myanmar, but likely remains too divided to deliver lasting change on the ground.

Given the divergent geostrategic interests of external actors in Myanmar, a concerted effort to achieve change in the country is unlikely. Hence, sustained change has to come from within the country.